The Proteas have won five out of seven T20Is in Durban. Four of those victories have come while batting second

In the East London ODI, England needed seven runs in the last seven balls after Eoin Morgan took Beuran Hendricks for 14 runs off three deliveries. But Lungi Ngidi’s final over gave South Africa a one-run victory and most importantly, a 1-0 lead in the series. Going into the second T20I at the Kingsmead in Durban, the Three Lions can’t afford any complacency, being in a must-win scenario.

The Brits have lost both their T20Is at the venue, though they came way back in 2007. On the contrary, Durban has been a happy hunting ground for the Proteas, having won five out of their seven T20I games. South Africa last lost a T20I at the ground back in 2014 and are on a three-match winning streak. A series win will give them a breather after a lacklustre home campaign thus far.

The pitch in Durban has been fairly decent for batting with an average score of 159 in T20Is. Though six out of 12 games have been won by the chasing teams, South Africa have an 80 per cent record while batting second. Hence, they may wish to bat second. Luckily, there are no chances of rain, albeit clouds will be there. The temperature will be around 26 degrees with the humidity in the 70s.

The Proteas are unlikely to tinker with their winning combination. Openers Temba Bavuma and Quinton de Kock looked in ominous touch and got the innings going. Rassie van der Dussen played at a decent rate as well. David Miller and JJ Smuts got runs, but strained to press the accelerator.

Smuts had a horrible outing with the ball, giving away 22 runs in the only over he bowled. The focus will be on Ngidi, whose cutters kept foxing the English batting in the dying stages of the game. Dale Steyn did most things right on comeback. Tabraiz Shamsi was on the economical side as well.

The visitors may bring in Sam Curran in place of Tom, who leaked 41 runs in three overs. Mark Wood also travelled the distance and conceded over 20 runs in one of his overs. The massive positive for England was their spinners- Adil Rashid and Moeen Ali, both of whom had economy less than six.

Moeen would be looking for a better show with the bat after failing to take his team over the line. In  batting, Jason Roy and Morgan are in good rhythm on the backs of quickfire fifties. Buttler and Bairstow got starts as well. It’s no up to the likes of Stokes and Denly to find some much-needed form. 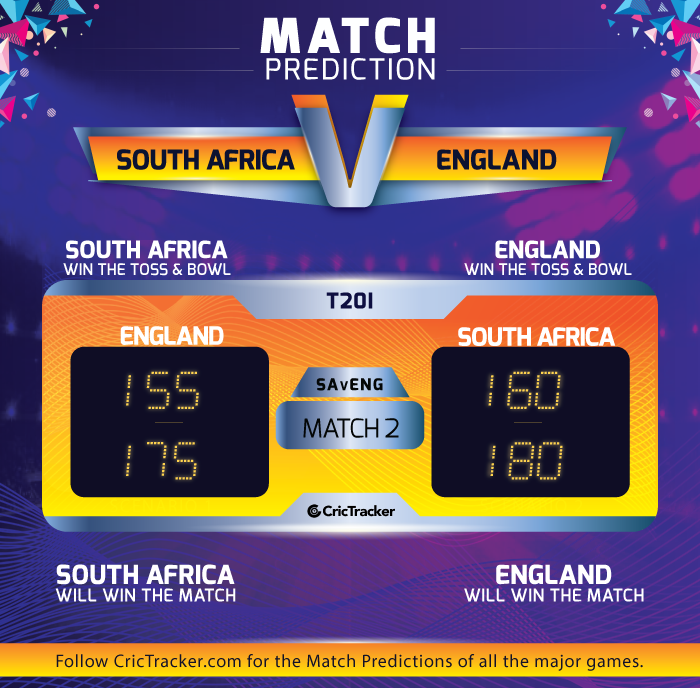