The team, batting first has won seven out of nine T20Is in Centurion with an average first-innings score of 183.

The T20I series between England and South Africa has been a nail-biter thus far. Both the games in East London and Durban were high-scoring affairs and went right down to the wire. The Brits floundered at the Buffalo Park, but made amends at the Kingsmead. With all to play for, the teams now head to Centurion where the third and deciding game would be played at the SuperSport Park.

The Proteas have played five T20Is at the venue in which they came out trumps four times. The Three Lions took part in the format in Centurion only once back in 2009 and lost by 84 runs, chasing 242. In the previous game, the hosts failed to score three runs off the last two balls with Dwaine Pretorius and Bjorn Fortuin getting out. The final match is also expected to be an absolute thriller.

The pitch in Centurion has traditionally been batting friendly with the average score being 174. But while batting first, the average goes up to 183. Also, seven out of the nine T20Is have been won by the sides defending targets. Hence, chasing can be avoided. The conditions will be clear with no chances of rain. The temperature will be around 28 degrees Celsius with the humidity in the 20s.

The Proteas may be tempted to bring back Dale Steyn, who was replaced by Bjorn Fortuin last time around. Fortuin bowled only a couple of overs the other night. Beuran Hendricks’ form is also bit of a concern. The left-armer has two wickets, but has leaked runs at an expensive economy rate of 13.

Ngidi and Phehlukwayo are their leading wicket-takers with six and four wickets respectively. Shamsi has been tough to get away as well. In batting, De Kock has been outstanding, scoring 96 runs at a strike-rate of 259.45. Temba Bavuma and Rassie van der Dussen have also been pretty consistent.

The Brits didn’t change their lineup last time and they are likely to persist with the same lineup. Jason Roy is their leading run-scorer with 110 runs at a strike-rate of 164.17. The others have also contributed their bit. Moeen Ali couldn’t take his team over the line in the East London T20I match.

But he made up for it with a 11-ball 39 that propelled England over the 200-run mark. In bowling, Mark Wood and Tom Curran have three wickets each, but their economy of 10.14 and 12.28 respectively is a bit of a concern. Chris Jordan has been the pick of their bowlers with four wickets. 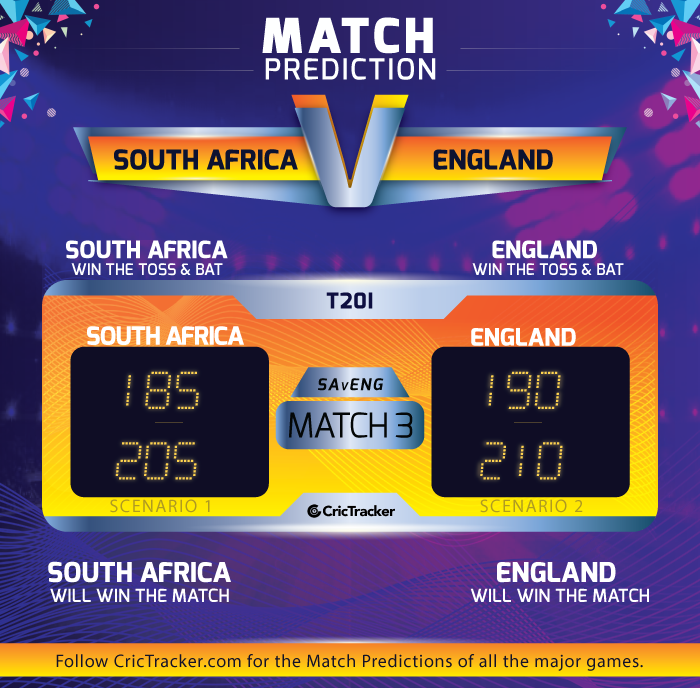