This 3-match T20I series presents Pakistan with a great opportunity to win a series on what has been a rather tough tour so far.

With the home team having wrapped up both the ODI and Test series, the focus now shifts to the final leg of Pakistan’s tour of South Africa – the T20I series. While the hosts dominated the Test series, Pakistan displayed grit in the ODI series. With the series locked at 2-2, the final ODI promised much but South Africa romping home with 10 overs to spare was a bit of an anti-climax. The T20I series promises loads of action. Pakistan is at their unpredictable best in this format and this only adds to the excitement.

Pakistan is currently on a nine-match winning streak in T20I cricket – a commendable effort considering the format and the standard of T20 cricket at the highest level. With Sarfaraz Ahmed’s ban, Shoaib Malik is tipped to lead the squad.

Mohammed Amir comes back into the squad and he will bolster the tourist’s pace attack that currently features Hasan Ali and Usman Khan.

Babar Azam and Fakhar Zaman have had a good look at the conditions on the tour so far and their experience will be vital if Pakistan is to put up a good show with the bat.

Note that Imran Tahir and Kagiso Rabada have been rested and this opens up a window for a few others. Tabraiz Shamsi and Chris Morris will get a chance to prove their worth and put themselves up for World Cup selection.

South Africa’s number-six spot is up for grabs and this is where Mulder and Henrich Klassen will battle it out although the latter is expected to get the nod.

Quinton de Kock will open the batting as always and walking out with him will be Reeza Hendricks. Meanwhile, Faf du Plessis will shepherd the middle order as always and van der Dussen’s skills will come in handy as well.

Asif Ali: the batsman had a great run in the Super League where he collected 150 runs. He could prove to be the ‘x-factor’ for Pakistan in this series

Quinton de Kock: the stylish wicket-keeper batsman is back to his best and is in good nick as well with a half-century in the final ODI against Pakistan

Faf du Plessis: the South African skipper is solid and reliable as always

Babar Azam and Fakhar Zaman: these two make for great picks from the Pakistan outfit. While the latter is a typical T20 dasher who can take the side off to a flyer, the former is classical in his approach and yet super-effective

Tabraiz Shamsi: you could think of going with this South African version of India’s Kuldeep Yadav. He hasn’t had much of international cricket of late and that is where he could prove to be unpredictable and yet effective 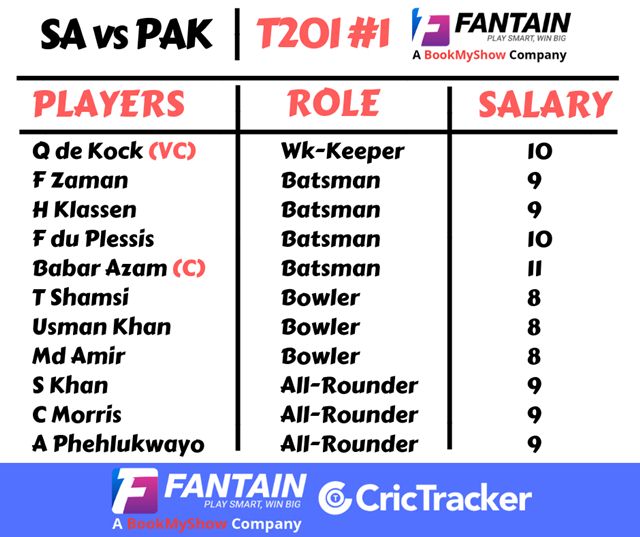