The 3rd T20I is Pakistan’s opportunity to finish the tour with a consolation win.

For a side that’s number one in the world, a series loss is always difficult to stomach. But what makes matters worse for Pakistan is that these two T20I losses were rather close ones and with this, they’ve now added the T20I series to the Test and ODI series’ they’ve lost on this tour.

With just two ODI victories to show over a month and half long tour, Pakistan is bound to be a frustrated unit at the moment. Sarfaraz Ahmed has served his four-match suspension and will return to lead the squad. The 3rd T20I will be Pakistan’s final opportunity and a victory will be a much-needed consolation.

Junior Dala has gone for runs with little success to show in the wickets column. The hosts therefore, might look to hand Willem Mulder a game. Lutho Sipamla bowled an economical spell on debut and he could well be a strong future prospect for South Africa.

Note that Sarfraz Ahmed will come right back into the squad and take charge. Meanwhile, Asif Ali, Usman Khan and Faheem Ashraf’s performance will come under the scanner. Expect changes in the form of Faheem Ashraf coming in for Ali and Usman Khan being replaced by Mohammed Amir.

Babar Azam: opening the batting, Babar Azam’s 58-ball 90 was great to watch. Studded with 13-boundaries and one six, Azam held the batting together. If anyone, you can count on him to deliver the goods yet again for Pakistan

Andile Phehlukwayo: we thought the hosts might rest the all-rounder but were so wrong. The hosts continue to play him and Phehlukwayo continues to deliver. His 3/36 were the best figures in the 2nd T20I and he’s a good bet given his all-round abilities as well

Hussain Talat: Talat’s 41-ball 55 was vital for Pakistan’s run chase in the 2nd His partnership with Azam put the team on course but their dismissals brought about the demise of the run-chase. Considering Talat’s knock of seven boundaries and a six, he could be vital to your line up

Imad Wasim: the left-arm orthodox spinner’s spell of 1/9 from four-overs is as good a T20 spell as you can get, also considering the fact that he was opening the bowling. Remember, he can bat as well and such options are always great to have in your Fantain Fantasy Cricket XI

David Miller: the stand-in skipper’s 29-ball 65 knocked the stuffing out of Pakistan in the 2nd Miller’s knock, studded with four-boundaries and five-sixes is just what you’d expect from the left-hander and his current form should make him an automatic choice for your line-up. 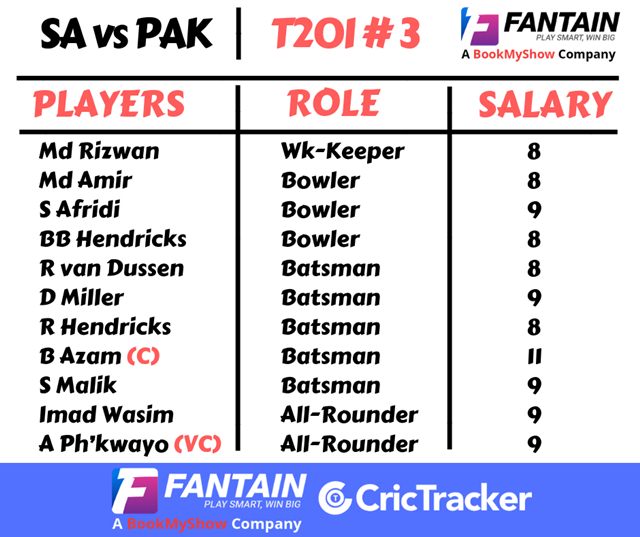