South Africa have an upper hand in the five-match ODI series against Pakistan at the moment. After the completion of the first three games, the Proteas lead 2-1. Come the fourth game, they’d be looking at nothing but a series win. Moreover, playing in the Pink jerseys will boost their confidence by a massive margin. The team hasn’t lost a single game thus far whenever they’ve donned the Pink kits. AB de Villiers will be dearly missed by the home team in this Pink ODI.

Pakistan has competed well in the series so far. However, they failed to capitalise on the key moments in the last two matches and ended up on the wrong side of the result. The ‘Men in Green’ made a terrible decision to bat first after winning the toss in the 3rd ODI which affected their chances. Rain prediction was on cards and the case would’ve been different had they batted second.

The Bullring is expected to be absolutely intimidating for the visitors. Especially in the light of the racist comments that were made recently, the spectators will not hold back from bashing the Pakistani players. The pitch could carry a lot of bounce and the Pakistan team is expected to be mentally prepared for all of this. Yet again, it will be a cloudy day and there is a prediction of rain in the afternoon and the night. We might not get a full game of play and toss will play an important factor.

Depending on whether they bat first or second, South Africa has got to work around with their batting order keeping the rain in mind. If they get to bat first, Rassie van der Dussen and David Miller might get to bat up the order to have some quick runs as per the requirement. The management is expected to rope in Imran Tahir in place of Tabraiz Shamsi.

As he personally apologised to Andile Phehlukwayo, Sarfaraz Ahmed might have evaded the suspension that was on the cards. Hence, he will continue to lead the Pakistan side and will also keep the wickets. There will be high expectations on Imam-ul-Haq who has been in good form. The batsmen will need to work around finishing the innings well.

The prediction is that South Africa will continue to dominate in the Pink jersey. 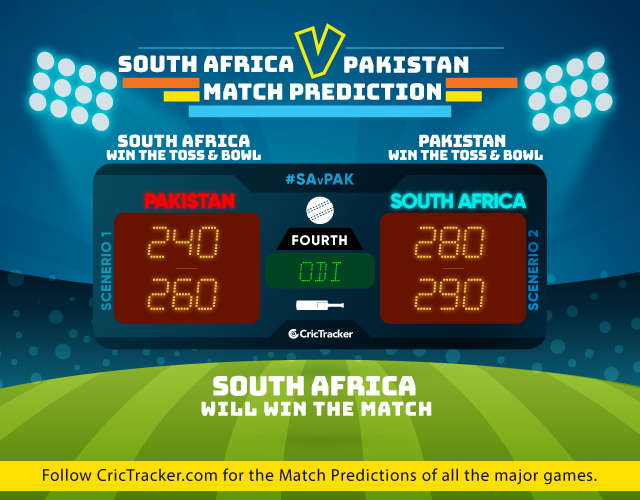