It could be a batting paradise at the SuperSport Park in Centurion.

Sri Lanka were pushed onto the backfoot in the first ODI against South Africa at the renowned Wanderers in Johannesburg. Thus, the visitors ended up conceding a 1-0 lead to the hosts in the five-match series. Their batsmen struggled in the game and most of them failed to make the most of the starts. The bowlers as well were disappointing especially after picking up an early wicket in the second innings.

Rather than going aggressive, they took a defensive approach as soon as the batsmen began to build small partnerships. They struggled to pick the wickets and there is no way a side can win when they play such brand of cricket. There is a lot to ponder over for them and the Proteas would look to continue the dominance. The visitors should look to derive inspiration from the Test series and play much more competitive cricket going forward.

It could be a batting paradise at the SuperSport Park in Centurion. The last time a game was played here in January this year, Pakistan scored over 300 runs in the first innings. The outfield is fast and it isn’t the place where you’d want to be a bowler. While the weather during the course of the match is predicted to be cloudy, the chances of precipitation are almost nil and we could get a full game of cricket here at this venue this time around.

Quinton de Kock will continue to open the innings for the Proteas along with Reeza Hendricks. It could be a juggle between Faf du Plessis and Rassie van der Dussen for the next two spots in the line-up. South Africa will also be looking to bring Andile Phehlukwayo into the eleven along with Dale Steyn. Following an impressive debut, Anrich Nortje might get another chance.

Upul Tharanga will open the innings along with Niroshan Dickwella. There will be high expectations on both the Kusals as well as Oshada Fernando after the impressive show on the debut. The team might replace left-arm speedster Vishwa Fernando with either of Kasun Rajitha or Isuru Udana.

South Africa is likely to take a 2-0 lead in the series. 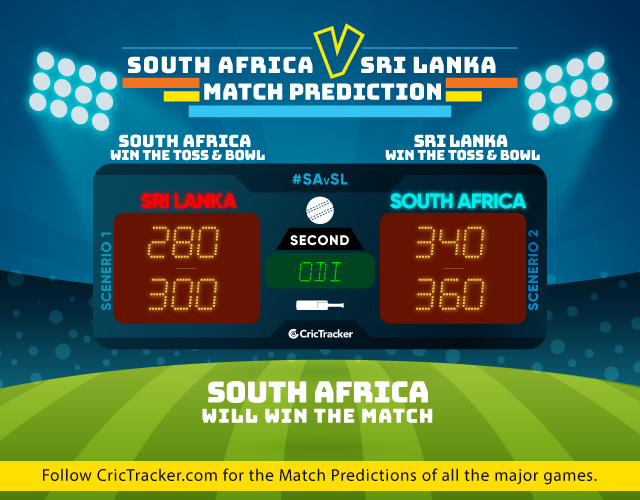