South Africa has had a few days to figure out what hit them at Durban and they will now be ready to turn the tide against Sri Lanka.

Sri Lankan cricket was in turmoil and very few backed this team touring South Africa at the moment. But one knock from Kusal Perera changed all of that. Even if the flamboyant leftie were to not score a single ton going forward, the Islanders will sing songs of his efforts at Durban for decades to come.

Going into the 2nd and final Test at Port Elizabeth, the tourists find themselves at the cusp of a remarkable Test series victory. Meanwhile, Faf du Plessis will be itching to head out with his men and set the record straight.

The loss at Durban was like a bolt from the unknown for the hosts. They’d mauled Pakistan in the Test series and were expected to coast past Sri Lanka. But if you were to look at their Durban performances closely, a few chinks being to appear.

The top-order appeared fragile – Markram, Elgar and Amla were rolled out twice for not very many. And this left their skipper and de Kock to do all the heavy lifting.

As for their bowling department, everybody witnessed how the seamers wilted under pressure every time Sri Lanka counterpunched. That said, do not expect changes in their line-up. Du Plessis will believe in this unit and is expected to walk out with the same bunch of players and turn things around in the 2nd Test.

LahiruThirmanne is a bit of a weak link at the top of the order for the tourists. He either departs early or sticks around for a bit without scoring big. But the Sri Lankans are short of options on the opening front.

Also, Sri Lanka would need strong contributions from Dickwella and KusalMendis if they are to stand up to the bowling onslaught that is to come their way in the 2nd Test.

Kusal Perera: we have to start with the hero from the 1st His 153* from 200-balls has already been touted as one of the greatest knocks ever and for this reason alone, picking him in your Fantain XI would be a no-brainer.

Quinton de Kock: the South African wicket-keeper batsman is in superlative touch at the moment. With half-centuries in both innings at Durban, the southpaw has shown the he’s hungry for more and he could well score a big one here

Faf de Plessis: with de Kock, the South African skipper had to do the bulk of the scoring in the 1st He’ll give your Fantain XI solidity and some assured points

Vishwa Fernando & KasunRanjitha: consider these Sri Lankan newbies on the basis of their performance in the 1st Test

KagisoRabada: the last time South Africa played at this venue, Rabada picked up a 10-wicket haul. And with the team on a mission now, the pacer is bound to be fired up. 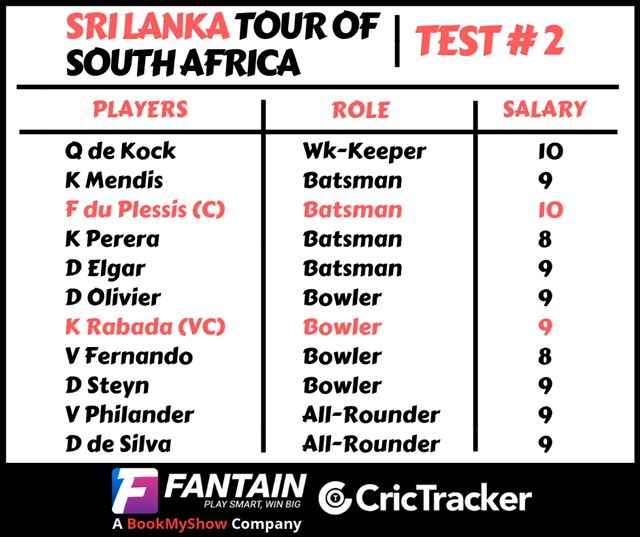