Owing to his poor run in the series, South Africa might bench Reeza Hendricks.

South Africa will be playing its last ODI game before the World Cup 2019 on Saturday. They will face Sri Lanka in the last game of the five-match series and will surely look to complete the clean sweep. With JP Duminy coming back in, the Proteas, led by Faf du Plessis, look much stronger now. They were over-reliant on Quinton de Kock and Faf du Plessis during the first three games of the series.

Their eleven that will take the field in the 5th ODI might give a hint about what their likely combination could be for the quadrennial event. Sri Lanka, on the other hand, are drifting away with every game that they play. Their performances have been hapless and are raising many concerns. It is all left upon the batsman now if they are to escape the embarrassment. The side will play two more ODIs in May against Scotland.

Situated at the foot of the Table Top mountain, Newlands cricket stadium in South Africa is one of the most mesmerising venues in the world. The pitch is likely to have a good amount of assistance for the bowlers as it offers both swing and bounce. It isn’t one of those high scoring venues but the batsmen can cash in once the ball gets old. The weather is predicted to be partly cloudy and there shouldn’t be any interruptions to the match.

Owing to his poor run in the series, South Africa might bench Reeza Hendricks. Rassie van der Dussen is likely to take his place while Aiden Markram will open the innings. Dale Steyn is likely to play as Kagiso Rabada will continue to be rested. Imran Tahir might make his way back into the eleven.

There are several unanswered questions for Sri Lanka heading into this game. They are bound to tinker with their combinations again. Angelo Perera, the man who scored double centuries in both the innings of a first-class match last month, is likely to play this encounter. Niroshan Dickwella will continue to sit out while Kusal Mendis will keep the wickets in his place.

The prediction is that South Africa will complete the clean sweep. 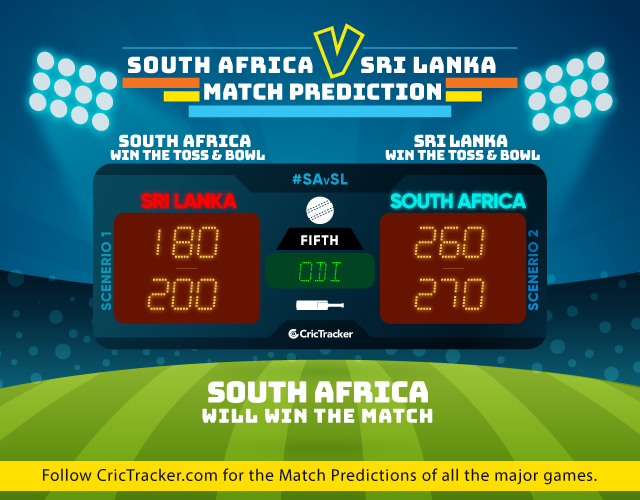