South Africa vs Zimbabwe, 1st T20I, Match Prediction: Who will win the match?

Faf du Plessis returns to the side as the Proteas aim to clean-sweep the T20Is as well.

After a pretty one-sided banter in the ODI series in Zimbabwe, the action now shifts to the East Cape where the T20 games will be played. Once again, the Proteas enter the series as the firm favourites as the visitors have failed to come to the terms of the conditions so far.

Apart from a decent bowling performance in the second ODI and a not so bad effort with the bat in the 3rd, the Zimbabweans have not been on par with the side led by JP Duminy. Faf du Plessis will now take over the mantle from the all-rounder and will be keen to clean-sweep the series.

The return of their talismanic pacer Dale Steyn has come in as a delightful news for the South African fans and the management would not risk his fitness by playing him in the T20s. Some fresh and young faces are in the squad for this game, aiming to gain some attention from the national selectors who are just about beginning to short-list the players for the upcoming World Cup.

The weather is expected to remain warm and dry on Tuesday in East London. This is only the second T20I being played at this venue and it has taken over six years for them to host another. A high-scoring game is expected as the pitches here are always decent for batting.

Quinton de Kock will open the innings alongside debutant Rassie van der Dussen, with the experienced campaigners JP Duminy and Faf du Plessis coming in at 3 and 4. Heinrich Klaasen, David Miller and Christiaan Jonker will be forming the lower middle order.

Imran Tahir once again will hog a lot of limelight after a spectacular performance in the ODI series. If the pitch remains dry on Tuesday, he and Tabraiz Shamsi will be absolutely lethal. Lungi Ngidi and Junior Dala will be the fast bowling options for Faf.

Skipper Hamilton Masakadza as always will open alongside Solomon Mire. Tarisai Musakanda, Brendan Taylor, Sean Williams, Peter Moor and Elton Chigumbura will be forming the middle order for the visitors.

Chris Mpofu has not been having a great time off-late in International cricket and he will be looking to turn things around with a good show in this series. Tendai Chatara and the veteran Kyle Jarvis will be the other fast bowling options, alongside one leg-break bowler Brandon Mavuta.

The prediction is for South Africa to win the game quite comfortably and take a 1-0 lead in the series. 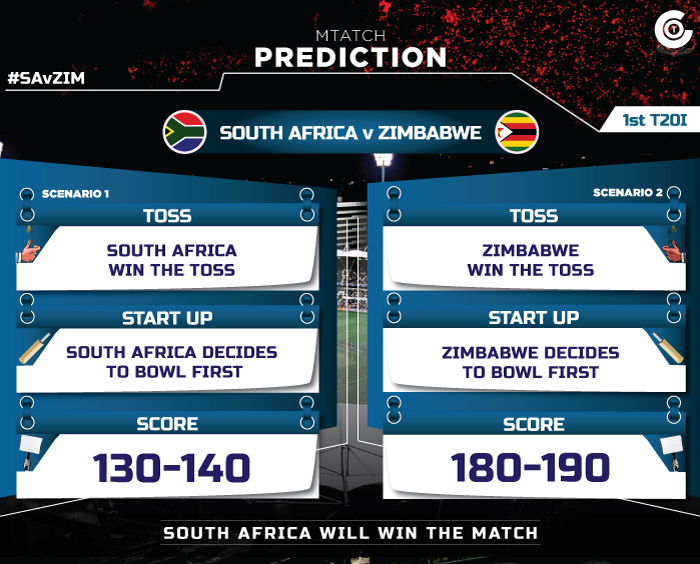