The T20I series between South Africa Women and Pakistan Women has been dominated by the chasing teams as they won all the four games played so far. The 5-match series is now levelled at 2-2 as the two teams won alternative matches. The hosts chased down 173 in the 4th T20I to level the series which is their biggest chase in Women’s T20I.

It was Pakistan Women who recorded their biggest T20I chase in this format during the 3rd T20I. They bounced back from 3/3 to scale down 139 in a final over thriller. The Proteas Women interestingly rested their premier all-rounder Marizanne Kapp in the last two matches. The Suné Luus-led team still managed to put on some good performances in her absence.

The 5th and final game of the 5-match T20I series between South Africa Women and Pakistan Women will be hosted by the Willowmoore Park in Benoni.

There live streaming of this game is available on Cricket South Africa’s YouTube Channel.

The Benoni’s Willowmoore Park produced the highest scoring Women’s T20I game on South African soil on Wednesday. The short boundaries helped the batters hit the big shots at will. The track witnessed early momentum but became flat as the game progressed.

Points of selected players in each game of this series (Power Picks):

Bismah Maroof, Lizelle Lee and Nida Dar have scored two fifties in this series. Nida Dar also has four wickets in this series which makes her a must have as captain or vice-captain. 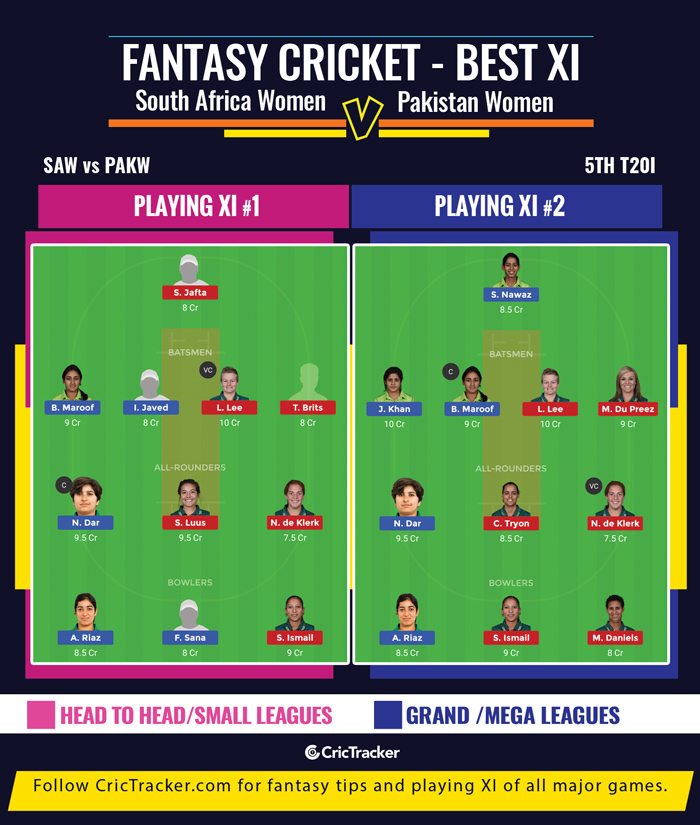 Marizanne Kapp was rested for the previous two games. The suggested XIs have been made expecting the Proteas to rest. If Kapp gets into the XI, she can be picked alongside Nida Dar in the all-rounder’s category. Nadine de Klerk is a good choice in her absence as she bats at No.3.

South Africa Women are expected to win the T20I series by defeating Pakistan Women in the decider.