Who should be your captain among Chamari Athapaththu, Dane van Niekerk and Marizanne Kapp?

Sri Lanka Women will begin their tour of South Africa on February 1st as they take on the hosts in a 3-match T20I series which will be followed by a 3-match ODI series part of the ICC Women’s ODI Championship. Both the teams are coming from a disappointing group stage exit in the recently concluded Women’s World T20. The Proteas defeated the Lankans and Bangladesh before losing to the England and Windies Women in the league phase while Sri Lanka managed to beat only Bangladesh.

There are a couple of changes made to both the squads compared to what they played with during the World event. The hosts even dropped Sune Luus from both T20I and ODI series following her recent poor performances, especially during the WBBL. However, the vice-captain Chloe Tryon has been ruled out of the T20I series only to be replaced by Luus. The T20I series will be simultaneously played along with the Men’s series between the hosts and Pakistan.

The first game of the 3-match T20I series between South Africa Women and Sri Lanka Women will be hosted by the Newlands in Cape Town.

This match will be televised by South African broadcaster, Super Sport. However, there is no information regarding the broadcast details in India yet.

Cape Town produced decent totals for the Women’s matches recently. One of the main reasons being them played prior to the Men’s game on the same track. The pitch here is perfect for the batters and 150+ totals can be witnessed.

South Africa Women’s vice-captain Chloe Tryon has been ruled out of this T20I series due to a groin injury and has been replaced by Sune Luus.

Nadine de Klerk is a promising all-rounder in the hosts’ line-up. The 19-year-old featured during the home T20I series against India but didn’t get many chances to prove. In the recent One-Day domestic tournament, Klerk bagged three wickets and scored 52 runs across three games this season.

Skipper Dane van Niekerk is the best option as captain or vice-captain looking into her form during the Women’s Big Bash League. She could be seen opening the innings which will increase her impact in the game. Even if Niekerk bats down, she has got enough capability to be the MVP of the match. The Sri Lankan skipper Chamari Athapaththu is also similar to Niekerk and can be considered as the other multiplier. Mignon du Preez, Marizanne Kapp and Shashikala Siriwardene also can be picked. 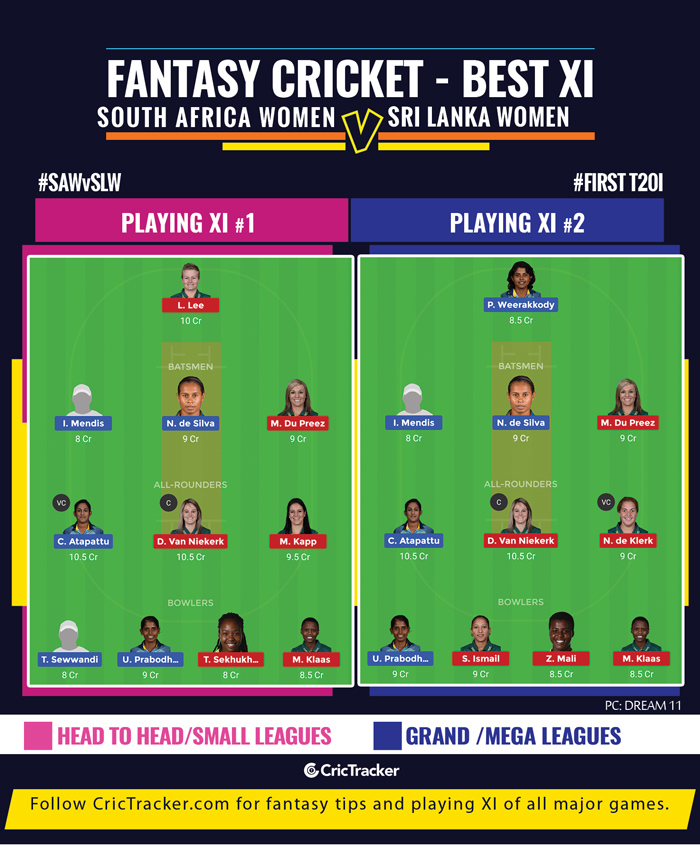 Chamari Athapaththu, Dane van Niekerk, Marizanne Kapp, Nadine de Klerk and Shashikala Siriwardene are part of the all-rounders category. It will be tough for anyone to choose only three among the five. Niekerk, Athapaththu and Kapp will be safe going into the first game of the series/tour.

South Africa Women are expected to begin the T20I series with a comfortable win against the visiting Sri Lanka.