South Africa might bring back Mignon du Preez after the batting collapse in the 2nd match.

South Africa Women completed a series win against the Sri Lanka Women winning the first T20Is of the 3-match series at home. However, Sri Lanka might not be disappointed with the series result given the fight they put up in both the losses. The hosts lost three wickets and batted till the 16th over for chasing down the target of 91. Skipper Dane van Niekerk had a perfect double in the game scoring an unbeaten 71 and picking up three wickets.

The second T20I went down to the wire while the visiting side put on their best to defend the total of 105. Sune Luus, who couldn’t find a place in the T20I squad before Chloe Tryon’s injury, starred with the ball in this match. Luus registered figures of 5/14 in the 3.4 overs she bowled. Chasing a target of 106 runs, the Protea Women lost eight wickets and reached the target on the penultimate delivery of the game.

The third and final game of the 3-match T20I series between South Africa Women and Sri Lanka Women will be hosted by the SuperSport Park in Centurion.

The SuperSport Park has hosted only two Women’s International matches thus far. The 2016 ODI between South Africa and England witnessed the hosts chasing down 263 while the last year’s T20I between Proteas and India ended without a result. South Africa had a 103-run opening stand in 12.3 overs and were 130/3 in 15.3 overs before the rain ruled out any further play.

South Africa might bring back Mignon du Preez after the batting collapse in the 2nd match.

The Sri Lankan captain Chamari Athapaththu hasn’t been at her best in recent T20 Internationals. She scored only seven runs in the first game but had a decent outing with both bat and ball in the 2nd game. She scored 20 runs and picked up 2/18 with the ball. 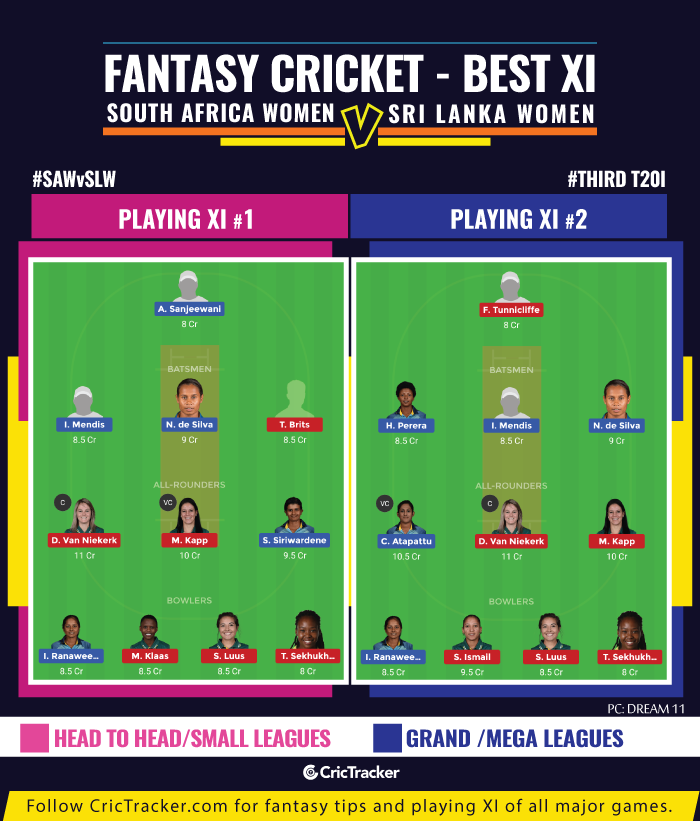 Both teams are expected to present similar playing XIs despite the fact that the result of the series has already been decided. Picking the players who performed well in the first two matches will be a good idea.

South Africa Women are expected to complete a whitewash in the T20I series against the Sri Lanka Women.