Soumya Sarkar will be ideal to be picked as a multiplier for this match.

The 1st game of the 3-match Unofficial ODI series between Sri Lanka A and Bangladesh A will be played at the Mahinda Rajapaksa International Cricket Stadium in Hambantota.

Bangladesh A has fared decently in the ongoing tour of Sri Lanka thus far as both the unofficial Test matches against Sri Lanka ended in a draw. They posted totals of 360 and 330 in the two matches and took the first-innings lead in 2nd match. The skipper for this tour Mominul Haque scored 117 in the 2nd Test and will lead them in the 3-match unofficial ODI series starting on Wednesday.

The first two matches of this series will be played in Hambantota which hosted the unofficial Test series. The likes of Soumya Sarkar, Mehidy Hasan and Mohammad Mithun will be in action for the visitors. These three players didn’t produce big performances at the International stage recently. They will be up against the Sri Lanka A team who will be led by Ashan Priyanjan.

It could be a miracle if we can get a full 50-over game on Wednesday here in Hambantota. Scattered thunderstorms are expected during the match timings.

The Mahinda Rajapaksa Stadium in Hambantota has been a high-scoring venue. This ground has hosted five List A matches since the start of 2017. The first batting team posted 300+ on four occasions and the chasing teams crossed the 300-run mark in three of those. We might not see big totals with moisture around due to the continuous rains over the last couple of days.

Saif Hassan has done well with the bat for the Bangladesh Emerging and Bangladesh A teams. Pathum Nissanka just scored 85 and 192 respectively in the 2nd unofficial Test. He has done well in the limited-overs for second string Sri Lanka A teams. Asela Gunaratne will be hoping to make a mark in this series for returning into the national side. Salauddin Sakil took 24 wickets from 18 matches in the List A format.

Soumya Sarkar will be batting at No.4 and could be seen bowling his medium pace for at least five overs on a pitch with moisture. He will be ideal to be picked as a multiplier for this match. 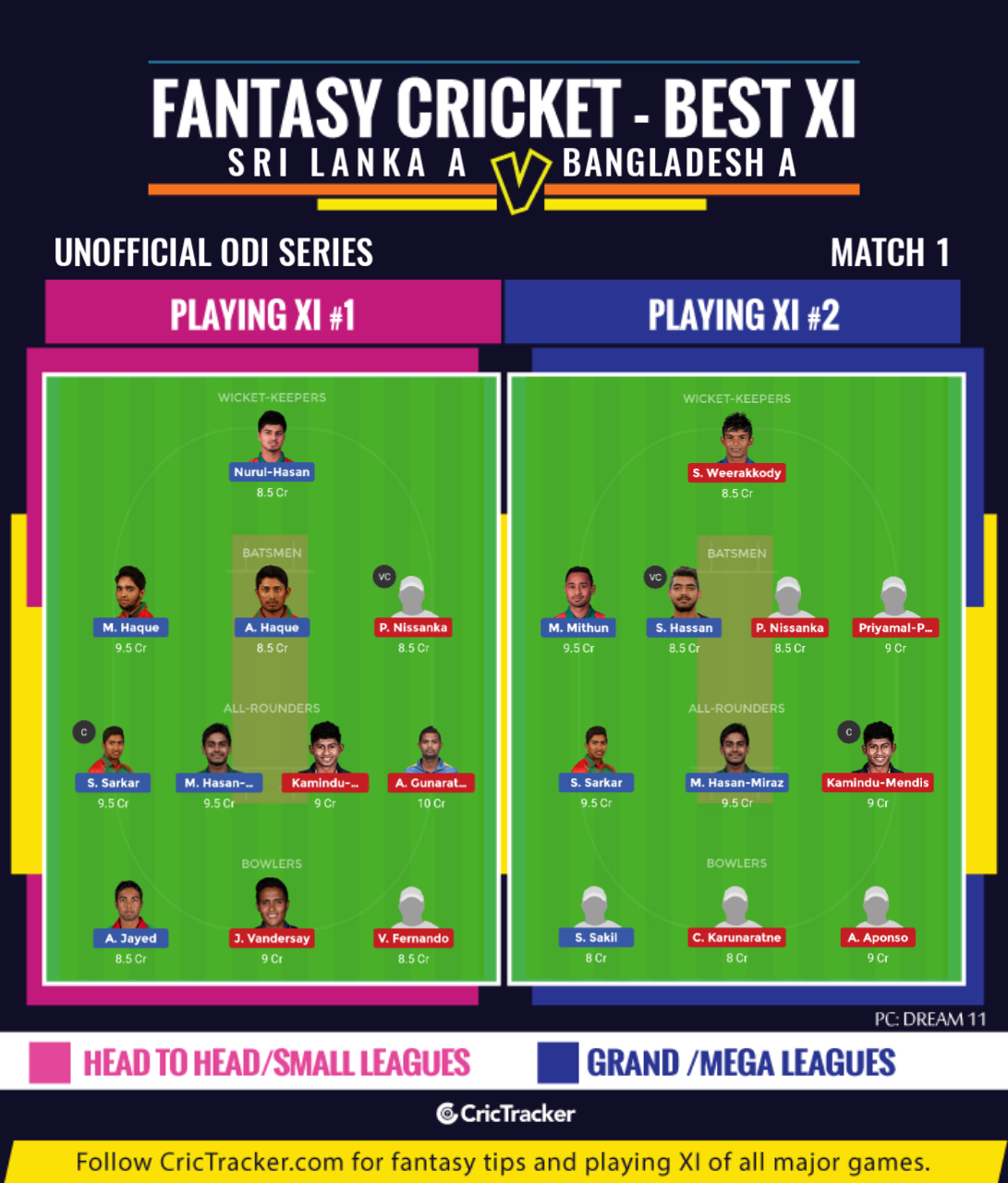 Both the teams have at least 10 players in their squad who have the experience of playing International cricket or coming close to play the same via representing ‘A’ teams. They are expected to be in the starting XI ahead of the newcomers.

Compared to the hosts, the Bangladesh A side have more experience and are expected to go 1-0 up