Sri Lanka vs England, 2nd ODI, Match Prediction: Who will win the match?

Sri Lanka vs England, 2nd ODI, Match Prediction: Who will win the match?

Rain played spoilsport in the first ODI and the expectations are higher from this game.

England were outright favourites at the start of the series just for the way they’ve played white ball cricket in the last few years. In the little action that was possible in the first ODI, their approach was the same as there was visible intent in their run-scoring which wasn’t affected even by the fall of wickets. That game was taken over by the rain gods and there is a definite possibility of a repeat show.

Both the teams, however, will want the otherwise to happen as they want to make the most of ODI game time leading into the World Cup. Sri Lanka under Dinesh Chandimal have a lot to look forward to, getting the team in order is the first on the priority list. They are still in the process of identifying the names they should back for the longer run. England, on the other hand, handed Olly Stone a debut in the last match, he will hope to get a chance to hit the pitch this time.

The behaviour of the pitch will largely depend on the weather which looks gloomy. There is a good chance that rain will have a say in the proceedings. October is termed one of the rainiest months in the Island nation, however, having a reserve day for the second ODI will definitely help the cause.

There is no reason why Sri Lanka need to change the combination, also because most of their players didn’t even get an opportunity to put up a show. Chandimal will want to persist with the same XI. A lot of eyes will be on Lasith Malinga along with his partner Nuwan Pradeep, Akila Dhananjaya is certainly the one Sri Lanka expect to deliver the goods and so is the skipper himself.

England should also field an unaltered combination and continue to back Jason Roy and Jonny Bairstow as the opening combination. Roy will certainly want to ensure he doesn’t get out to the spinners again as Sri Lanka will test him with the spin challenge early on. Root, Morgan, Stokes and Buttler form a robust batting order with Moeen and Woakes being the bonus run-getters.

The prediction is for England to take a 1-0 lead in the series. 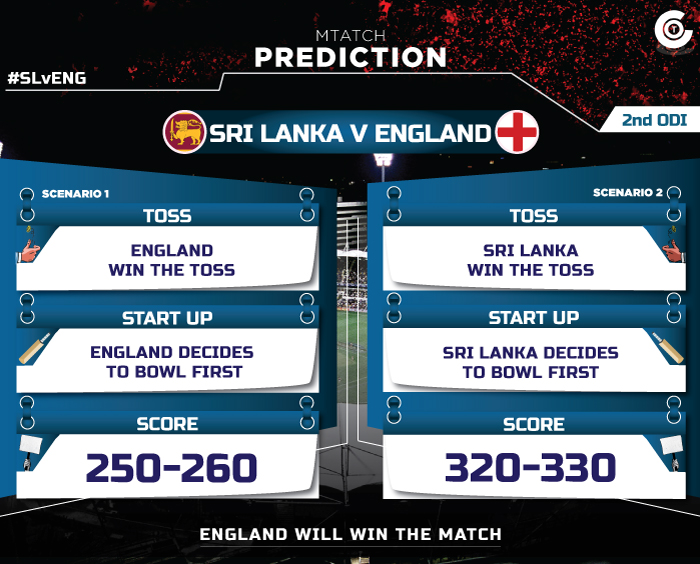