After losing the series, the Lankans will be looking for 10 crucial points in the ODI Super League.

India have already sealed the fate of the three-match ODI series against Sri Lanka at the iconic R Premadasa Stadium in Colombo. Even as the first victory on Sunday was a pretty straightforward one, the Men in Blue had to play out of their skins to secure the three-wicket win on Tuesday, July 20.

The Lankans, meanwhile, would be disappointed for letting the second ODI slip after getting India on the mat. The third and final ODI is scheduled to take place on Friday, July 23. Although they have lost the series, the Dasun Shanaka-led hosts have 10 important ODI Super League points to play for.

The pitch in Colombo has been fairly good for batting. Scores over the 250-run mark have been registered every time in the series. Hence, a fairly high-scoring game can be expected for Friday’s match. Chasing should be the way forward. There are chances of rain from 2 PM onwards and hence, there could be a few delays. The temperature will be around 27 degrees Celsius.

Shikhar Dhawan has looked secure at the crease in the ongoing ODI series against Sri Lanka. Though he didn’t get the Player of the Match award in the first game, scored 86 runs to see his team over the line. He is also the leading run-scorer of the series with 115 runs at an average of 115. Dhawan scored 29 off 38 balls in the second game before Wanindu Hasaranga dismissed him.

Wanindu Hasaranga has been a revelation for Sri Lanka in the last two years or so. Batters have found him tough to read and the same has been the case for the Indians as well. In the first ODI, the leg-spinner couldn’t make a breakthrough. However, he made amends in the second match, picking three crucial wickets. Hasaranga is also more than handy with the bat and can make useful runs. 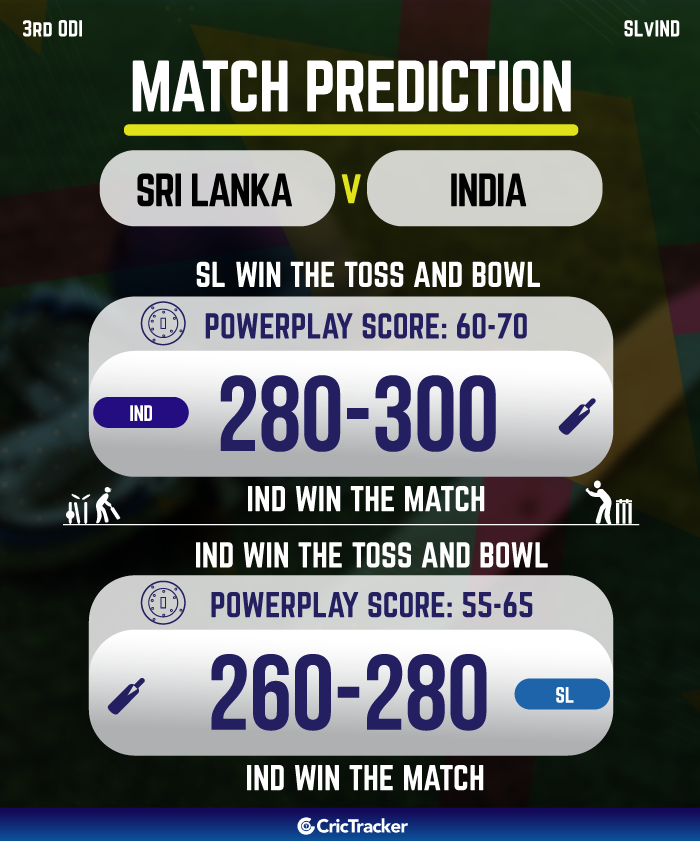