The first game of the three-match Twenty20 International series between Sri Lanka and West Indies will be played at the Pallekele International Cricket Stadium in Pallekele.

After a hugely entertaining three-match ODI series that saw momentum sway from one end to the other consistently before Sri Lanka held their nerves to complete a 3-0 whitewash, the caravan of the West Indies tour of the island nation moves to the T20I series where both sides will look to start their preparations for the upcoming T20 World Cup in Australia.

Both these sides are the past two World T20 champions but their form in the past three years has fallen to such an extent that every game from now, will be crucial for them as far as redeeming their fortunes and come up as a potent force like they once used to be.

Sri Lanka, who were shellacked 0-2 in their last T20I series against India, has managed just 13 victories out of 39 since the start of 2017 and just four since the start of 2019. Skipper Lasith Malinga has been under humongous pressure for failing to change Sri Lanka’s fortunes during his captaincy stint and the upcoming series will provide another opportunity to get things back on track.

West Indies, on the other hand, have also seen their fortunes nosedive in the shortest format of the game. Since the start of 2017, the defending champions have managed just 13 wins out of the 40 games that they have played.

But the inclusion of serious firepower in the form of Andre Russell and Dwayne Bravo, who made a whirlwind comeback in the last series against Ireland, and Shimron Hetmyer, who missed out from the ODI series due to fitness-related issues, is expected added potency to the Kieron Pollard-outfit, setting it all up f0r a mouth-watering encounter.

An overcast day is expected to be the order of the day in Pallekele on Wednesday if the weather reports are to be believed. According to the report, the temperature is set to fluctuate between 24-34 degrees Celsius while the humidity is set to hover around 51%. Chances of rain- 0℅

We saw more than 600 runs in Pallekele during the third ODI. That said, as Angelo Mattews and Alzarri Joseph showed, there was enough in the pitch for the bowlers to exploit. With overhead conditions set to be the order of the day, fast bowlers may come to the party.

Nuwan Pradeep and Dhananjaya de Silva have been ruled out due to injury.

Sri Lanka: Avishka Fernando and Kusal Perera had a brilliant ODI series where they emerged as the leading run-scorers. They will once again be the key to their fortunes at the top. The trio of Angelo Matthews, Thisara Perera, and Isuru Udana will be crucial in the death overs with the bat. Lasith Malinga will spearhead the fast bowling unit while the wrist-spin duo of Lakshan Sandakan and Wanindu Hasaranga will be crucial in the middle-overs.

West Indies: Lendl Simmons has scored 206 runs in 7 T20Is since 2019 at an average of 41.20 and a strike-rate of 158.46. The onus will be on Simmons to provide a swashbuckling start to the West Indies to allow the shenanigans of the likes of Shimron Hetmyer, Nicholas Pooran and the all-rounders in Kieron Pollard, Andre Russell and Dwayne Bravo to play their game.

Fabian Allen will provide the batting depth and will serve as an off-spin option alongside leggie Hayden Walsh. Sheldon Cottrell will lead the fast bowling unit while it will be interesting to see who the West Indies choose between Oshane Thomas and Kesrick Williams, who has suffered from the indifferent form in the past two series. 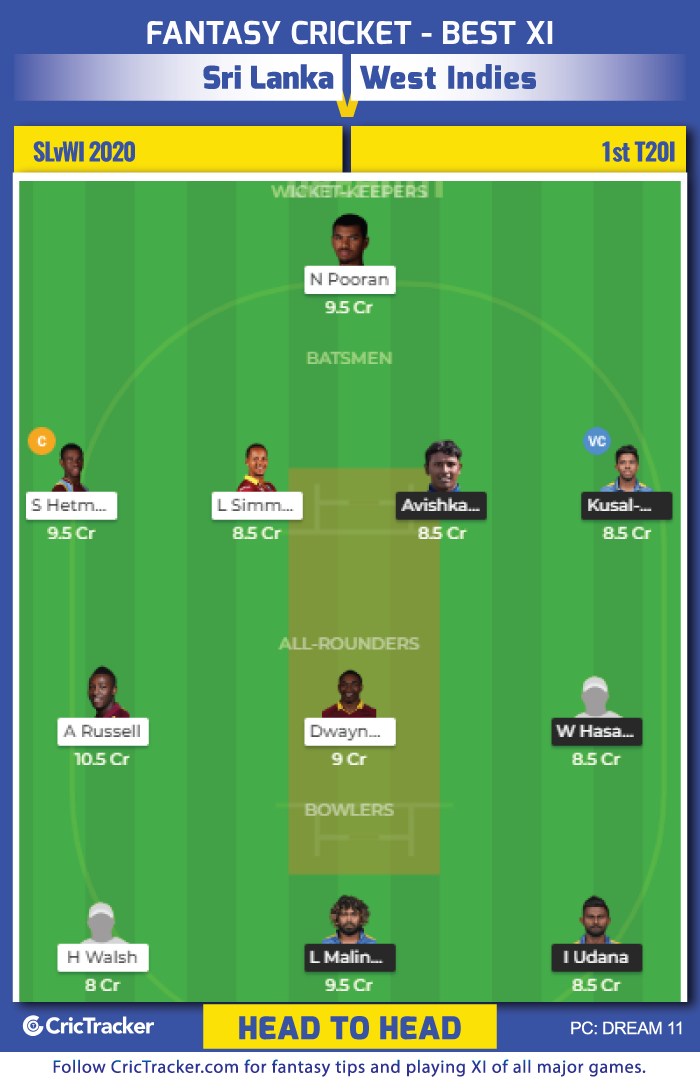 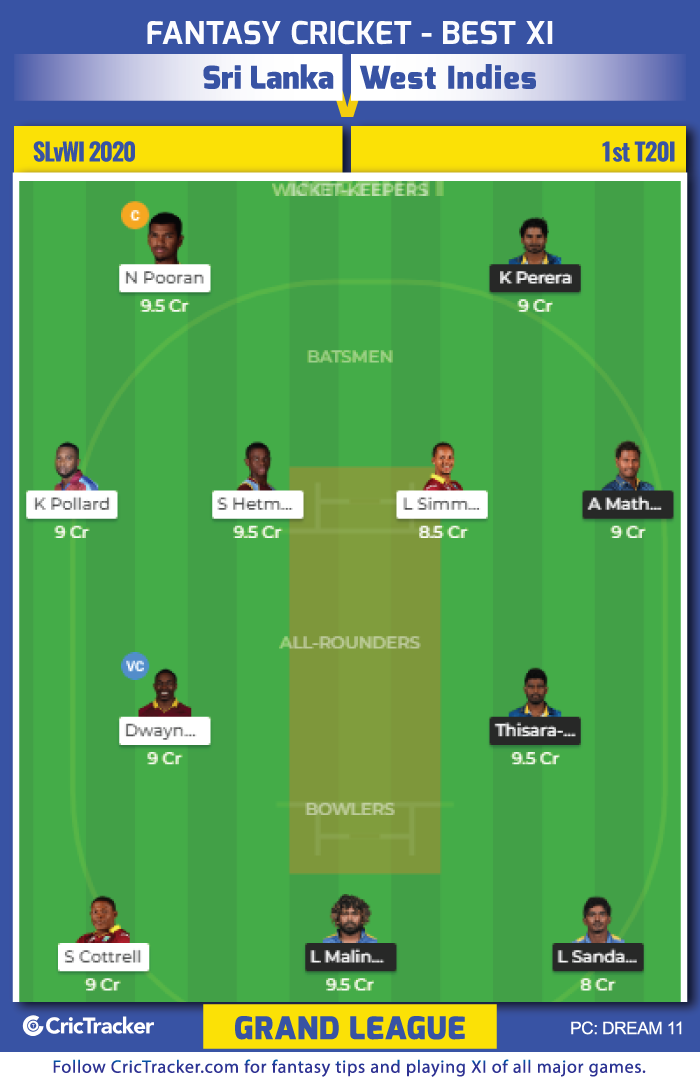 Both sides have got enough all-round options in Thisara Perera, Isuru Udana, Kieron Pollard, Andre Russell, and Dwayne Bravo- all of whom can contribute with both bat and ball. Hence, opting for them as captain/vice-captain is worth a punt.

West Indies is expected to come out as winners.