Sri Lanka vs Zimbabwe 1st ODI Match Prediction – Who will win the match?

Sri Lanka vs Zimbabwe 1st ODI Match Prediction – Who will win the match?

It will be huge if Zimbabwe pulls something out of the hat against Sri Lanka with a win.

The Island nation Sri Lanka is all set to host Zimbabwe for a three-match ODI series starting from the 16th of January and this will be the first limited-overs assignment for the Dasun Shanaka led side in 2022. They are coming off a 2-0 victory over the West Indies side in the Test match series and have started to show a lot of promising signs with the superstars in making.

Meanwhile, the Zimbabwe side has a lot of experienced campaigners in their lineup as Craig Ervine is all set to lead the team against Sri Lanka. They will miss the services of their head coach Lachand Rajput who is in isolation as he is hit by Covid-19, however, he will return for the third ODI.  Zimbabwe last played an international fixture in September last year in which they won the T20I series against Scotland.

Where to Watch:  Sony Sports network

This could be one of the pitches where a score of around 250 will be very decisive as the average score suggests. The team winning the toss will be tempted to bowl first as chasing has been the way to go in the ground so far.

Charith Asalanka was in excellent touch in the T20 World cup 2021 and he is growing well in stature in what has been a great start to an international career. He did well against India in the home series and the 24-year-old looks promising for the future. He is yet to an international century which he might overcome in the Zimbabwe series.

Sean Williams has been around for the Zimbabwe side for a long time and his experience is going to play a key factor in the Island nation. He is almost nearing the 4000 run mark in the format in approaching his 140th game and the 35-year-old is very handy with his left-arm orthodox spin as well. 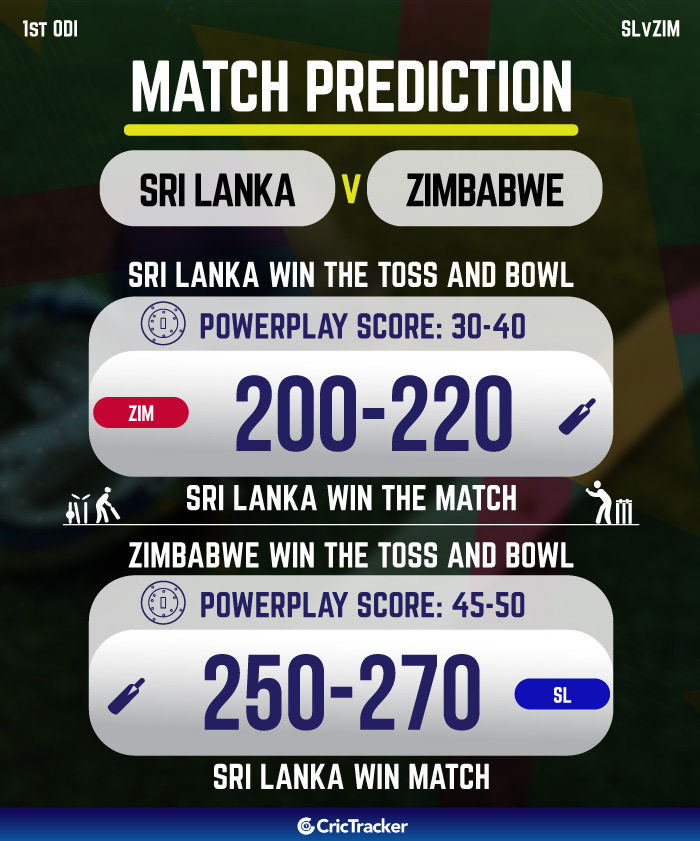