Katherine Brunt had bowling figures of 3/24 from her 7 overs during the first ODI.

England Women kick-started their tour of Sri Lanka with a huge win during the first of the 3-match ODI series on Saturday. The visiting team became the first side to post a 300+ total in Women’s ODI cricket in Sri Lanka. England finished with 331/7 in their 50 overs with all players contributing with the bat. Natalie Sciver (93), Amy Jones (79) and Heather Knight (61) scored fifties at an impressive strike-rates.

The Sri Lanka Women were never in the chase as they kept losing wickets in the first 15 overs. Katherine Brunt found some swing with the new ball as the hosts were seven down for 46 by 14th over with skipper Chamari Atapattu scoring 30 of those. If not for a record 8th wicket stand between Nilakshi de Silva (45) and Oshadi Ranasinghe (51*), the Lankan Women could have faced a serious embarrassment.

The second game of the 3-match ODI series between Sri Lanka Women and England Women will be hosted by the Mahinda Rajapaksa International Stadium in Hambantota.

Hambantota provided a high-scoring pitch for the first match of the ODI series. The venue used to witness big totals during the Men’s one-day games and it repeated during the Women’s match too. Bit of moisture can be expected during the first innings due to the weather over the weekend.

Katherine Brunt becomes a dangerous bowler when there is something for the pacers with the new ball. She has bagged 13 wickets from the last four games she played across all formats. Brunt claimed a 5-wicket haul against India in the last ODI and with the three wickets in the first ODI, she moved to the 5th position in all-time Women’s ODI wicket-takers list (144 wickets). The England all-rounder is only three wickets away from being the 3rd highest wicket-taker in this format. 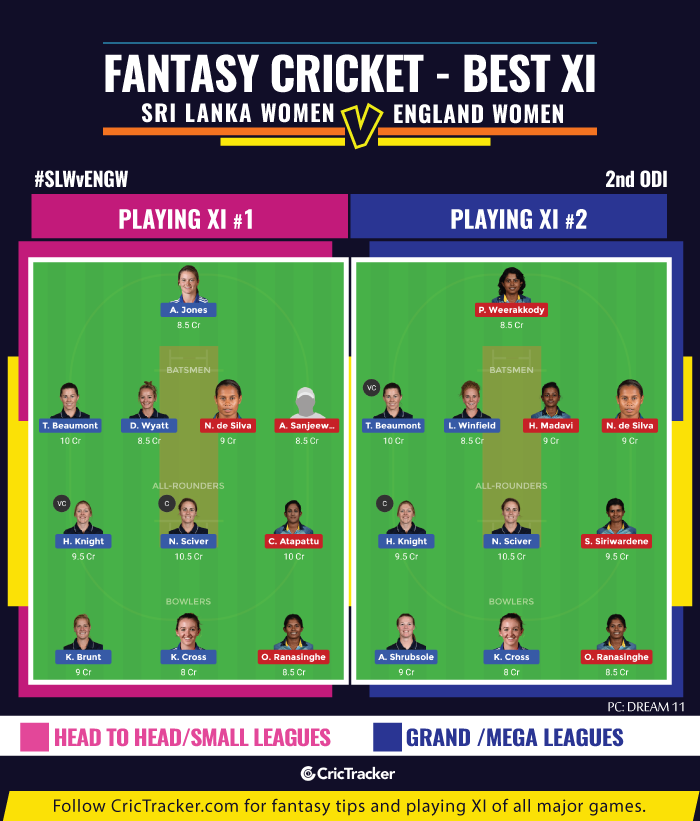 The Saturday’s game witnessed one of the seven instances and first for England where as many as five players scored 35 and more runs in a Women’s ODI innings. So picking all of England’s top six – Heather Knight, Natalie Sciver, Tammy Beaumont, Danielle Wyatt, Amy Jones and Lauren Winfield won’t be justified. Four among these six will be a perfect choice or a maximum of five if England bats first again.

England Women are expected to seal the 3-match ODI series against Sri Lanka Women with one game to spare.