Al Prince scored 28 off 20 balls and also picked up a wicket in the practice match. 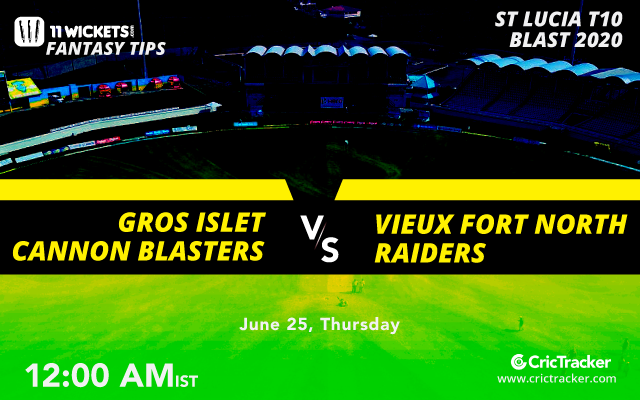 Gros Islet Cannon Blasters and Vieux Fort North Raiders kick start their campaign in the St Lucia T10 Blast on Wednesday afternoon at the Daren Sammy stadium which provided high-scoring tracks on opening day. Kimani Melius and Garvin Serieux with the bat and Simeon Gerson with the ball are expected to be among the top performers on Wednesday. The all-round performances of Al Prince and Hafeez Ali will be deciding how close the North Raiders stand in front of a victory.

The Daren Sammy stadium could be under clouds for the game between Blasters and Raiders.

Considering how the pitch played during Tuesday’s matches, we can expect the match between the Cannon Blasters and North Raiders to be a high-scoring one. Chasing targets of more than 100 is not going to be easy.

Garvin Serieux scored a total of 74 runs in the two practice matches including a fifty.

Al Prince scored 28 off 20 balls and also picked up a wicket in the practice match.

The Group B teams were involved in practice matches in the lead up of the tournament. Hence, the warm-ups are a great source of information for the game between Gros Islet Cannon Blasters and Vieux Fort North Raiders. The data of St Lucia T20 Leagues is unavailable at the moment and the teams we have picked is based on the top performances in practice matches.