India were crowned champions for the fourth time after defeating Australia by eight wickets in the final of the ICC U19 World Cup in New Zealand. The team was unbeaten throughout the tournament and were the deserved winners. Manjot Kalra smashed an unbeaten ton and made sure India chased down the below-par total of 217 with utter ease. However, Prithvi Shaw has equalled the record of the current skipper of Indian senior team Virat Kohli of winning all the matches as the captain in Youth ODIs.

Shaw led the India colts in 11 One-Day Internationals at the U19 level and went on to win all the matches. The Boys in Blue whitewashed England U19 in the five-match series last year and then won all the six games in the recently concluded World Cup. They defeated Australia, Zimbabwe and Papua New Guinea in the group stages after which the team trumped Bangladesh, Pakistan and Australia again in the knockout stages to eventually win the coveted title.

Virat Kohli and Prithvi Shaw sit pretty at the top of the list as both have won 11 matches on the trot in the Youth ODIs while leading the side. Cameron White of Australia is the next on the charts who had won 8 consecutive games with his troops. He recently made his comeback to the national side in the ODI series against England. Aiden Markram also has 8 back-to-back wins under his belt as the leader of the pack for South Africa at the U19 level. On Saturday, he was named skipper of the national side in the absence of Faf du Plessis.

The list is concluded with yet another Indian Tanmay Srivastava who had managed to lead the winning in 7 consecutive matches. Three Indians in the list proves that the Indian colts have been dominating in the U19 level as well. However, only a few of them make it to the senior side like the way Virat Kohli has managed to do who is ruling the charts in every format currently. 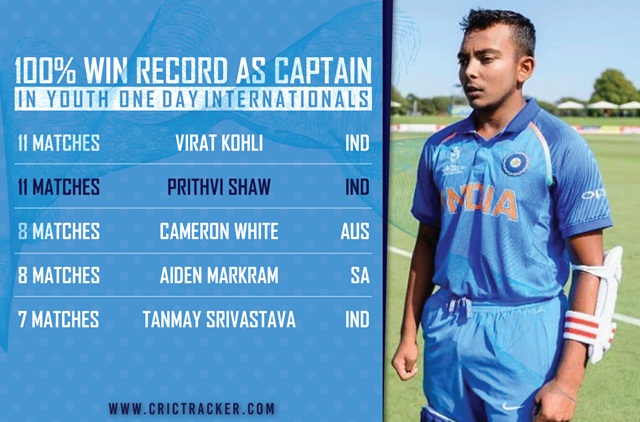