Afif Hossain, in only his 2nd International match, played a blinder of a knock for helping Bangladesh seal a 3-wicket win in the T20I Tri-series opener. The 19-year-old walked to bat at No.8 when Bangladesh lost their 6th wicket at the score of only 60 runs in the 10th over. With the required rate touching 10 already, the youngster had to take chances straight away. He showed the necessity of the intent by stepping down the track on the first ball he faced for a boundary to score his first runs in the International cricket.

Afif hit successive boundaries in the following over and converted a full toss on the last ball for a maximum. With his partner Mosaddek Hossain also getting into hitting mode, the required run rate was kept in check. Heading into the final over, the youngster brought up his fifty from only 24 balls; the joint 2nd fastest fifty for Bangladesh in the T20I format. The all-rounder got out in the final over where the hosts needed five runs which were scored in four balls only.

Afif Hossain was 19 years and 356 days old on Friday which makes him only the 8th teenager to score a fifty in the T20I format. He is the 2nd youngest player from Bangladesh to score T20I fifty. Junaid Siddique was 19 years and 325 days old when he scored 71 in the game against Pakistan during the 2007 WT20. Junaid held the world record until Umar Akmal surpassed him in 2009. By end of 2010, the record moved into the hands of Hiral Patel (18y and 177d) who scored an unbeaten 88 on his T20I debut before turning 19.

Nepal’s Sundeep Jora rewrote the record earlier this year. He scored an unbeaten 53 during an unsuccessful chase against UAE in January. Sundeep was only 17 years and 103 days old at that time of this feat. Jersey’s Steve Carlyon stands 2nd who also joined the list in 2019. Usman Ghani is the only guy younger than Afif to score a fifty in a successful T20I chase. Ghani was 18 years and 342 days old when he scored 65 in the 2015 Bulawayo T20I against Zimbabwe.

Youngest players to score a fifty in T20I cricket: 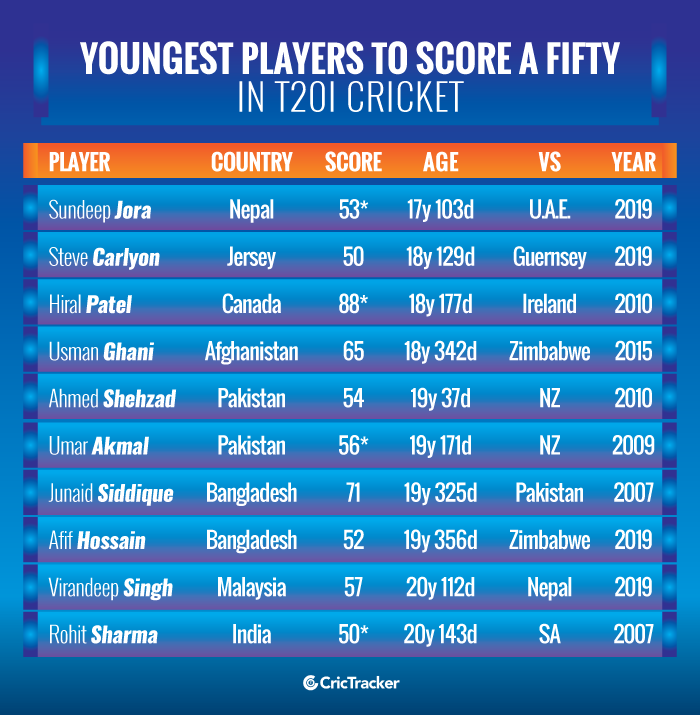