He made his first-class debut way back in 2009 for Victoria.

Aaron Finch finally ended his wait of becoming a Test cricketer as he received his cap in the ongoing first Test match between Pakistan and Australia in Dubai. The Australian limited-overs opener made his first-class debut for Victoria way back in 2009 and has been in the International arena since his T20I debut in 2012. Nearly two years later, Finch made ODI debut at his home venue Melbourne and has appeared in 93 ODIs thus far alongside 42 T20I matches.

The 93 ODI games Finch played before his Test debut are the second most by an Australian. Andrew Symonds featured in 94 ODIs for Australia prior to wearing the baggy green for the first time. The recent ball-tampering controversy saw David Warner, Cameroon Bancroft and Steve Smith getting banned for a year by the Cricket Australia (CA). The same incident brought Finch into the mix of the Test team. The opening batsman thus far played in 76 FC games scoring 4338 runs at an average of 36.15 with seven hundreds.

Most runs in International cricket before Test debut: 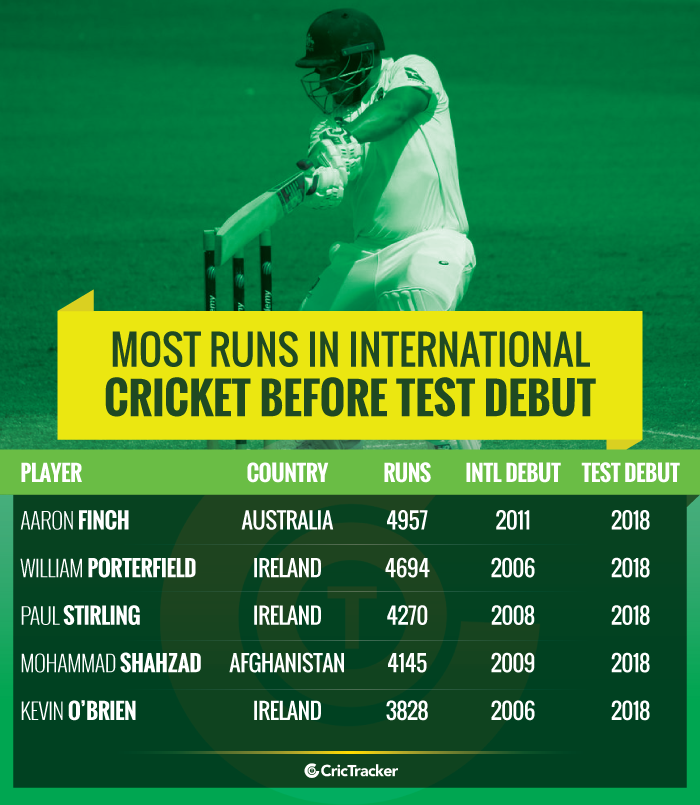 Finch currently has 4957 runs in International cricket under his belt needing 53 more runs to complete 5000 runs. He now holds the record for scoring most number of runs in International cricket prior to Test debut. In the process, he went past William Porterfield who amassed 4694 runs starting from 2006 up to Ireland’s inaugural Test match in May 2018. Another Ireland player, Paul Stirling, stands behind Porterfield by scoring 4270 runs.

The Australian debutant scored 11 centuries in the ODI format and two in the T20I cricket which were 150+ scores. Finch scored 156 in the 2013 T20I against England to record the highest individual score in the format and surpassed it himself with the 172-run knock against Zimbabwe earlier this year. His 3361 runs in ODI format before the debut in whites are the second most by any player. Ireland’s Porterfield had mustered 3692 runs before his debut in the longer format.

Most runs in ODI cricket before Test debut: 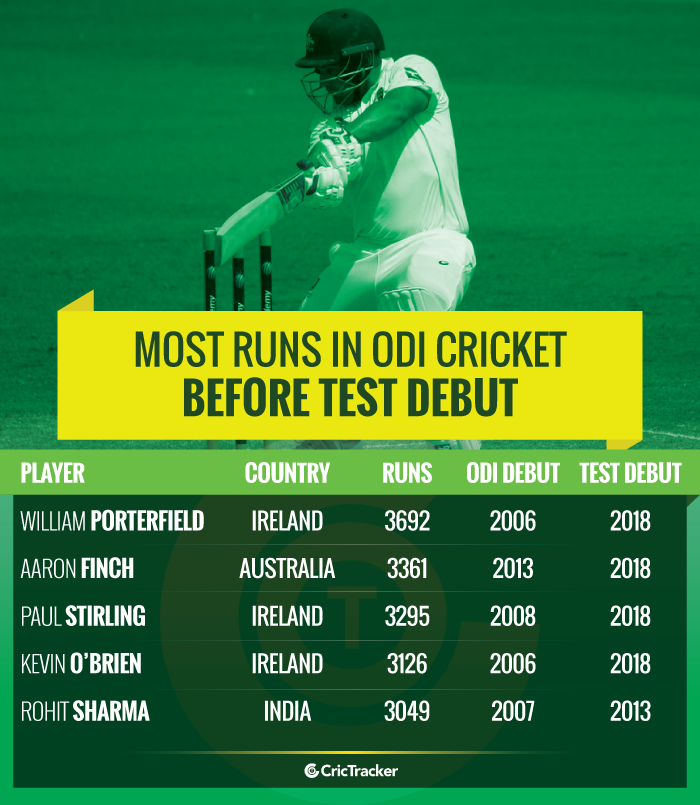