While the Afghanistan players gaining millions in the T20 leagues, their domestic structure continued to witness players creating threats to the world records. In one such instance on Wednesday, Afghanistan’s keeper-batsman Shafiqullah Shafaq rewrote the record for the fastest double century in the history of first-class cricket. During the Alokozay Ahmad Shah Abdali 4-day Tournament game, the Kabul Region captain scored an unbeaten 200 in just 89 balls during the 2nd innings against Boost Region team.

The Kabul captain walked out to bat at 58/3 on the final day after his side bagged a 163-run first innings lead. Shafiqullah hit two fours and six sixes in the first 29 balls he faced to score a fifty. Shafaq hit three fours and five sixes in the next 23 balls to bring up his maiden hundred in first-class cricket off just 52 balls. Shafaq turned out to be dangerous after reaching the 3-figure mark as he doubled his boundaries tally and raised to a 200 in just 89 balls. 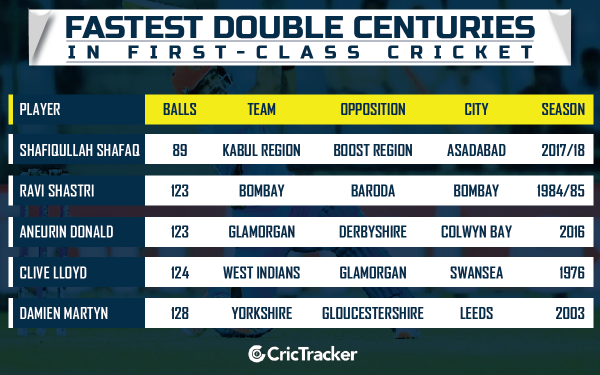 Thus, Shafiqullah bettered the record for fastest double ton by 34 balls as he broke the record jointly held by Ravi Shastri and Aneurin Donald. He completed his 200-run mark in 103 which is also the shortest by any player for an FC 200. Shastri needed 113 minutes to reach 200 during his 123-ball double ton effort. The Afghanistan player struck 11 fours and 22 sixes during his record effort. Interestingly, Shafiqullah scored 214 in 71 balls in a T20 game in 2017 but doesn’t come under official records.

Most sixes by a player in a first-class match: 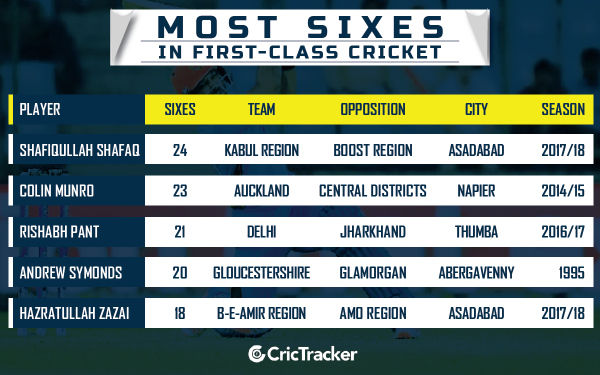