Alastair Cook was named as the Man of the Match for his efforts with the bat at The Oval.

Alastair Cook gave a perfect end to his Test career scoring 71 in the first innings and bettered it with a brilliant 147-run knock in the second essay to set up a victory for his team. Cook ended his Test career same as the way he kicked it off when he faced India 12 years ago in Nagpur. After receiving a late call-up, the left-handed opener scored 60 in his maiden innings and made an unbeaten hundred in the second.

Alastair Cook was named as the Man of the Match for his efforts with the bat in the last of the 5-match Test series against India at The Oval. He thus became only the 8th player to win the match award in the final appearance in a Test career. The first instance of a player winning the match award in his final Test match was Australia’s Ian Redpath who scored 101 and 70 respectively in the 1976 MCG Test against the West Indies.

Cook is the only England player to be a part of the list while Jason Gillespie’s career came to an end with a double century as nightwatchman. Cook could have been the only player to win the Man of the Match award in first and final Test match of career if he had won it one on his debut. Despite his efforts, the play of the match on his debut went to Matthew Hoggard who took 6/57 and 1/29 in that game.

Player of the match award in the last Test match: 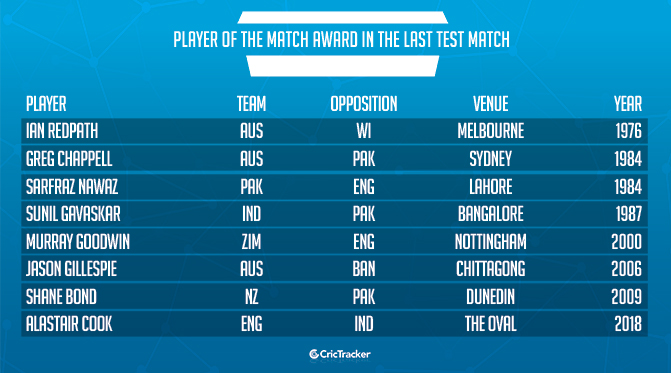