Alex Hales brought up his century in 47 deliveries while Rilee Rossouw needed 51 balls.

Alex Hales and Rilee Rossouw set the Bangladesh Premier League on fire on Friday in front of a sellout crowd during the first day of the Chattogram-leg. The Rangpur Riders duo had the Chittagong Vikings’ bowlers all over the park to power their side to a record total. Chris Gayle was dismissed in the second over at the score of six runs. Hales took the charge continuing where he left in the previous game.

The England opener smashed two fours and two sixes in the 5th over and hit two fours and a six in the next. He brought up his fifty in only 23 balls before the end of the powerplay. On the other end, Rossouw decided to hand more strike to Hales who was hitting boundaries in every over as the Rangpur side cruised at 12 runs per over. In the second half of the innings, the South African too started hitting big ones.

He brought up his fifty in 30 deliveries during the 14th over while Hales raised his century from only 47 balls in the next over before getting out. This brought an end to a 174-run partnership for the 2nd wicket coming in only 13 overs. After the Hales dismissal, Rossouw ensured Rangpur did not lose momentum by batting till the end. He also completed his century taking only 51 balls in the final over. 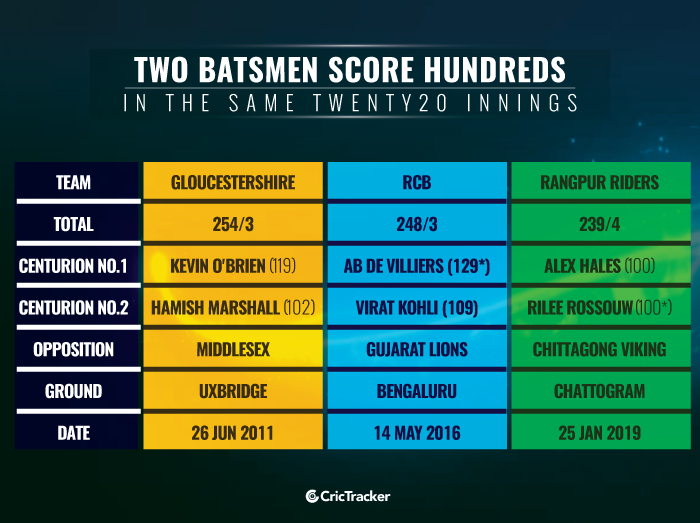 Thus, the duo recorded only the 3rd instance in the history of Twenty20 cricket where two batsmen scored centuries in the same innings. The first of them came in the 2011 England domestic T20 tournament by Gloucestershire opening pair of Kevin O’Brien and Hamish Marshall. AB de Villiers and Virat Kohli replicated this feat in the 2016 IPL game against Gujarat Lions.

By virtue of the hundreds by Hales and Rossouw, the Rangpur Riders put on a mammoth total of 239/4 in front of the hosts. Thus they bettered the highest total in the BPL history by a 22-run margin. The previous highest total in the Bangladesh premier league was 217/4 by Dhaka Gladiators during the 2013 edition against Rangpur only. Earlier this season, the Chittagong Vikings came close by posting 214/4 against the Khulna Titans. 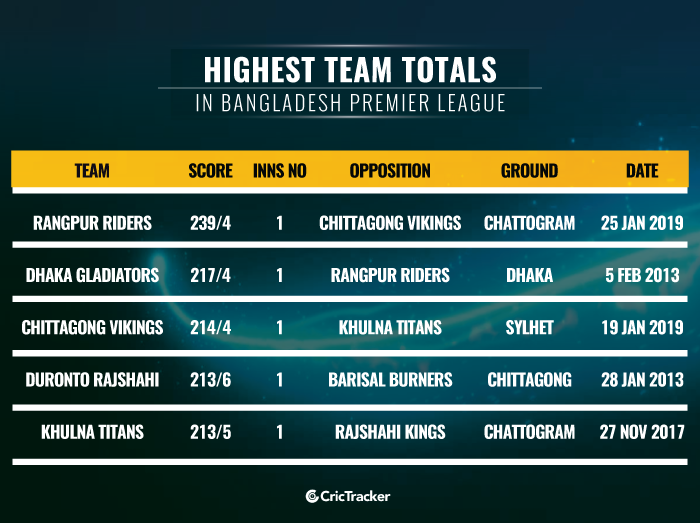