The decision of including the North-East states along with the other teams in Syed Mushtaq Ali Group phase has made an effect in the record books. The games involving the new entrants have given an edge to the experienced teams and many records in the tournament were seen tumble. The mighty Mumbai team turned too heavy for the Sikkim team as they posted 258/4 in their 20 overs with Shreyas Iyer scored 147 with help of 15 sixes on Day 1 in Indore.

At the same time, Bengal gave a massive thumping to Mizoram by posting 221 with help of an unbeaten century from Abhimanyu Easwaran. Bengal won the game by 159-run margin while Mumbai defeated Sikkim by 154 runs. On Friday, the Andhra team bettered both margins when they faced Nagaland at their home ground in Mulapadu. After electing to bat first, the Hanuma Vihari-led team posted their highest T20 total of 244/4.

Ricky Bhui scored an unbeaten 108 from 42 balls with five fours and ten sixes. He brought up his century in only 38 deliveries; the joint 2nd fastest century of Syed Mushtaq Ali. Rishabh Pant scored a 32-ball ton in the previous season while Iyer’s century against Sikkim also came off 38 balls. Bhui also became the first centurion in the T20 format for his Andhra team. He shared a 150-run stand for the 3rd wicket with Girinath Reddy in only ten overs.

In response, Nagaland were bowled out for only 65 runs and suffered a 179-run loss; biggest winning margin for any team in terms of runs in Twenty20 cricket. The record for biggest win in terms of runs was previously held by Sri Lanka who defeated Kenya by 172 runs. During the inaugural WT20 in 2007, Lanka posted 260/6 and bundled out Kenya to just 88. Bengal’s 159-run win and Mumbai’s 154-run win on Thursday are respectively the 6th and 8th biggest T20 wins in terms of runs.

Biggest victories in terms of runs in Twenty20 cricket: 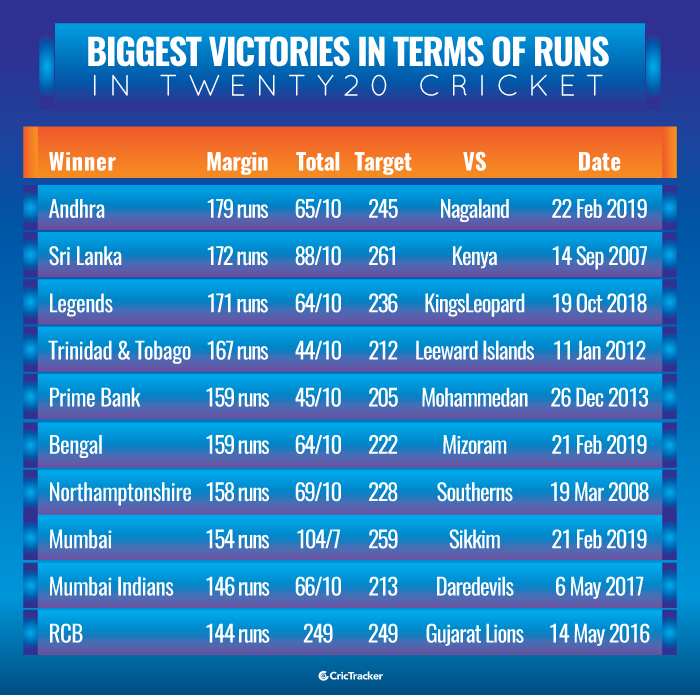