Ishan Kishan scored an unbeaten 100 off 55 balls against Jammu and Kashmir with eight fours and seven sixes.

Ishan Kishan began the Syed Mushtaq Ali T20 tournament with a 7-ball duck against Delhi but bounced back with an unbeaten century a day later. Ishan scored 100* off 55 deliveries with eight fours and seven sixes against Jammu & Kashmir as his team Jharkhand cruised to a 9-wicket victory. After being put to bat, the J&K team scored 168/9 in their 20 overs. They were cruising at 127/3 in the 16th over before a Rahul Shukla’s 5-wicket haul reduced further damage.

Jharkhand got off to a flyer in the chase as the openers Anand Singh and Ishan added 104 in 11.4 overs for the first wicket. Anand fell to Umar Nazir in the 12th over after scoring 48 from 34 balls. The Jharkhand skipper Ishan reached his fifty from 38 deliveries and went crazy after losing his opening partner. Jharkhand needed 61 runs from the last eight overs but they needed only 4.4 overs as Ishan raised his maiden T20 century.

The left-hander hit a six while was batting on 94 when his team needed only five runs to win. Thus, Ishan Kishan became only the 2nd player to score a T20 century for Jharkhand. Ishank Jaggi scored an unbeaten 108 against Andhra during the 2014/15 season. Ishan is also the first ever keeper-captain from India to score a Twenty20 hundred. The previous highest individual T20 score by a keeper-captain of India was 90* by Dinesh Karthik in 2010 against Andhra while representing Tamil Nadu.

Overall, Ishan Kishan is only the 5th player to score a century in the Twenty20 format while fulfilling wicket-keeper and captain roles in the same game. The other four players have had the experience of International cricket by the time of this achievement. Moin Khan was the first to do it when he scored 112 in 2005 which is still the highest T20 score by a keeper-captain. Adam Gilchrist is the only player to score more than one century as keeper-captain in Twenty20 format.

Centuries by keeper-captains in Twenty20 cricket: 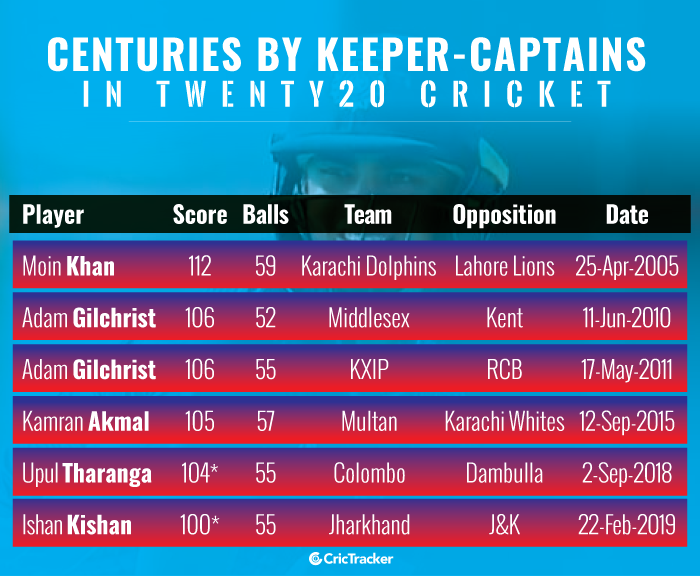