David Warner was on 4990 runs prior to the Mumbai ODI against India.

David Warner carried on his sensational performances with the bat from home season as he smashed an unbeaten hundred in the first game of the 3-match ODI series against India. During the match hosted by Mumbai’s Wankhede Stadium, Warner finished unbeaten on 128 from 112 deliveries with 17 fours and three sixes. He shared an opening partnership of 258* with his skipper Aaron Finch as Australia thumped India by 10 wickets. It is now the first-ever 250+ partnership in ODI format for any team against India.

The century in the 256-run stand was David Warner’s 18th century in the ODI format. It was his 3rd ton against India including two on the Indian soil. Warner managed to score only three 100s while chasing a target in this format and two out of three of them resulting in successful chases. When on 10, Warner completed 5000 runs in One-Day Internationals and thus became the 15th to do so from Australia. Overall, he is one of the 89 players with 5000 ODI runs in Men’s cricket. 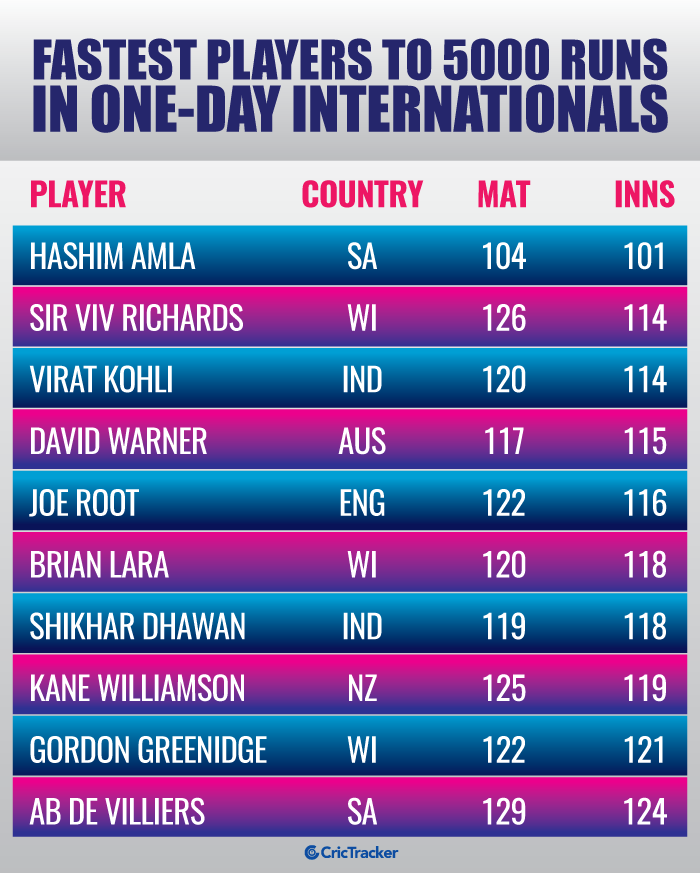 Davey reached the milestone in only 115 innings; the 4th fewest by any player. Hashim Amla leads the list as he needed only 101 innings. Sir Viv Richards and Virat Kohli share the second place taking only 114 innings. In terms of matches, Warner is second fastest as the Mumbai ODI was his 117th game in this format. Only Hashim Amla (104 matches) has aggregated 5000 ODI runs quicker than Warner in terms of matches. David Warner also became the fastest Australian to 5000 ODI runs.

Among the previous 14 Australian players to achieve this feat, the quickest was Dean Jones in 128 innings. Warner bettered that record by 13 innings. David Warner also completed 5000 ODI runs as an opener in this match. He did not open the batting only once in his ODI career till date – against Scotland (21*) in CWC 2015. The 114 innings he needed are the 4th fewest among the 22 players with this feat. Only Hashim Amla (100), Rohit Sharma (102) and Sachin Tendulkar (111) got there quicker than Warner.

Fastest to 5000 runs for Australia in ODI cricket: