Afghanistan U19 cricketer Azmatullah smashed a fifty off just 19 deliveries against New Zealand U19.

Team Afghanistan U19 stormed into the semi-finals of the ongoing ICC U19 World Cup 2018. They knocked out the hosts, New Zealand, by a thumping win of 202 runs. One of the stars of their herculean win was Azmatullah. The young batsman clobbered a quick 66 off just 23 balls during his stay at the crease. His knock was embellished with 3 fours and 7 towering maximums.

The late hitting from Azmatullah helped Afghanistan U19 post a mammoth total of 309/6 on the board. Earlier in the game, Rahmanullah, Ibrahim Zadran, and Baheer Shah had also hit fifties. In response, the New Zealand U19 crashed down like ten pins. They were bundled out for a mere 107 in 28.1 overs to crash out of the tournament.

While the win was a record win for the Afghanistani side, their all-rounder Azmatullah managed to fetch a record for himself as well on the personal front. His fifty in the match was one of the fastest in the history of youth cricket. It is worth noting that when the stats for the fastest fifties in youth cricket is talked about, it is referred to the ‘known’ fifties in this bracket.

There have been several youth fixtures which have not been officially documented. But for now, considering the all documented numbers, Azmatullah’s fifty became the joint second fastest fifty in youth cricket history. His fifty came off just 19 deliveries. West Indies cricketer Trevon Griffith had also hit a fifty off 19 balls against Pakistan in the 2009/10 season.

The record for the fastest fifty in youth cricket belongs to India’s Rishabh Pant. Pant, who was one of the key performers for India U19 in the previous edition of the tournament, had smashed a quick fifty off just 18 deliveries against Nepal at Mirpur in the ICC U19 World Cup 2016. Team India had finished as the finalists of the competition that year.

Another big name features in the list of top 5 cricketers with fastest fifties in youth cricket. Australia’s George Bailey had hit a fifty off just 21 balls against Kenya in the 2002 edition of the tournament. He held the record for the fastest fifty for almost 8 years before Griffith broke his record in 2010.

Rishabh Pant’s record was equalled by Joey Evison in December 2019. The England batsman scored an unbeaten 50 from 18 balls against Sri Lanka during the U19 Tri-series in West Indies. Evison smashed six maximums and two fours on his way through a quick-fire fifty as England scored 98 runs in the last 6.1 overs of their innings.

Take a look at the fastest fifties in Youth Cricket here 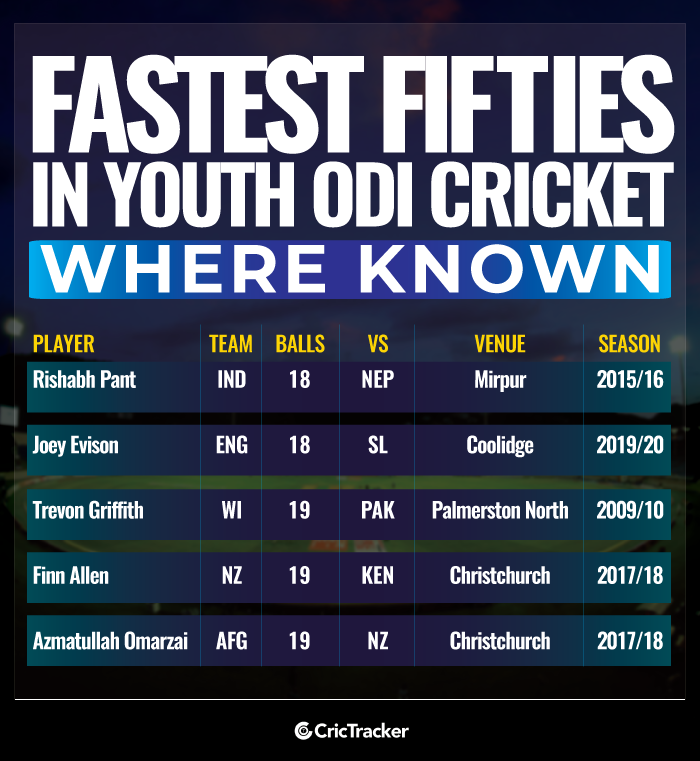 These cricket stats are as on 9th Feb 2020. For more updates and recent cricket news of the day, keep following the www.crictracker.com