The Nagpur-born Rohit Sharma made his debut more than a decade ago and started as someone, who threw his wicket away to rash strokes. However, gradually he developed into a matured batsman and put a price tag on his wicket. Subsequently, the 31-year-old carved himself a reputation as one of the most reliable batsmen in the Indian lineup, especially in limited-overs cricket.

He also has notched close of 8000 ODI runs and with a few years of cricket left in him, the opening batsman has been touted to break quite a few records in international cricket. Back in 2018, he was the second highest run-scorer in the 50-overs format with over 1000 runs. Moreover, he was also impressive as the leader and guided India to victories in the Nidahas Trophy and the Asia Cup.

The experienced campaigner is currently plying his trade in the ongoing five-match ODI series against New Zealand and hasn’t flattered to deceive by any stretch of the imagination. In the first match at the McLean Park in Napier, he got out for 11 and was nipped out by right-arm fast bowler Doug Bracewell. Nevertheless, he made a strong comeback in the second match at Bay Oval in Mount Maunganui.

The right-hander scored 87 runs from 96 balls with the help of nine fours and three over-boundaries. He also stitched together a stand of 154 runs with fellow opener Shikhar Dhawan. The veteran had more reasons to cheer as he became the fourth fastest Indian to score 10,000 runs in List A cricket.

He accomplished the feat in the third ODI in Mount Maunganui itself. He came into the match with 9979 List A runs and he didn’t have much difficulty in reaching the milestone. The numbers are also a testament to his stupendous prowess with the bat in hand. 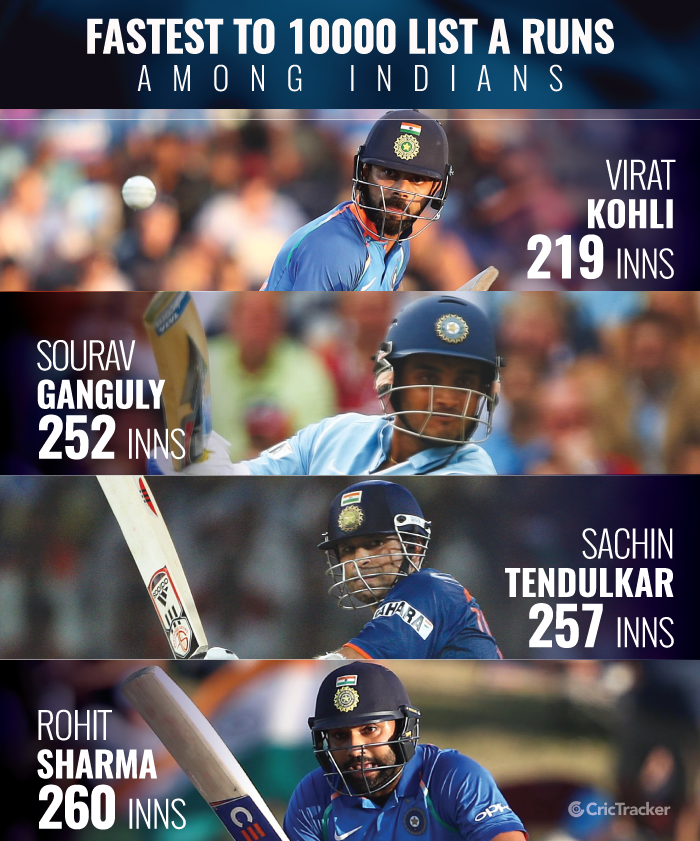