Fawad Alam’s decade long wait finally came to an end on Thursday when the left-hander was included in Pakistan’s playing XI for the 2nd Test in Southampton. Fawad’s last appearance in Test cricket came way back in November 2009 during Pakistan’s tour of New Zealand. He made his Test debut in July that year during the series in Sri Lanka. In the three Tests, Fawad scored 241 runs at an average of 41.66 including a 168-run knock in his 1st Test; the 2nd highest individual innings ever on debut for Pakistan.

It was quite surprising that Fawad had to wait this long to return into the Pakistan side even after considering the fact that senior players in the team quit in 2017 only. He was repeatedly ignored despite being a consistent scorer in domestic cricket and to top it, this happened after he made a solid start to his Test career. However, Fawad found a place in ODI and T20I formats until the end of 2010 before he was dropped from limited-overs as well.

He returned to ODI team again during the Asia Cup 2014 held in Bangladesh where he scored a crucial knock to take the team to the final. Even during the final, he helped Pakistan to reach a respectable total with an unbeaten century which went in vain. But no 30+ scores in six consecutive ODI innings between October 2014 and April 2015 saw the Karachi-born back to grinding runs at first-class level. Fawad Alam spent 10 years and 259 days between his 3rd Test and 4th Test appearance.

During this period, the left-hander amassed nearly 8000 first-class runs at an average over 56 with help of 26 centuries. Fawad thus became only the 2nd player to spend ten or more years between his two Test appearances for Pakistan. Younis Ahmed didn’t play a Test for more than 17 years between November 1969 and February 1987 as he was banned for touring South Africa. Younis ended up missing a total of 104 Test matches played by Pakistan in this period.

Pakistan played 88 Test matches between Fawad’s two appearances in this format. It is the 7th longest in the history of Test cricket and the 2nd longest break from Test cricket for any Pakistan player. Gareth Batty leads the list having missed 142 Tests played by England between June 2005 and October 2016. Fawad Alam did miss as many as 196 International matches since his last appearance in Pakistan colours that came in April 2015.

Players missing most consecutive Test matches of a team between two appearances: 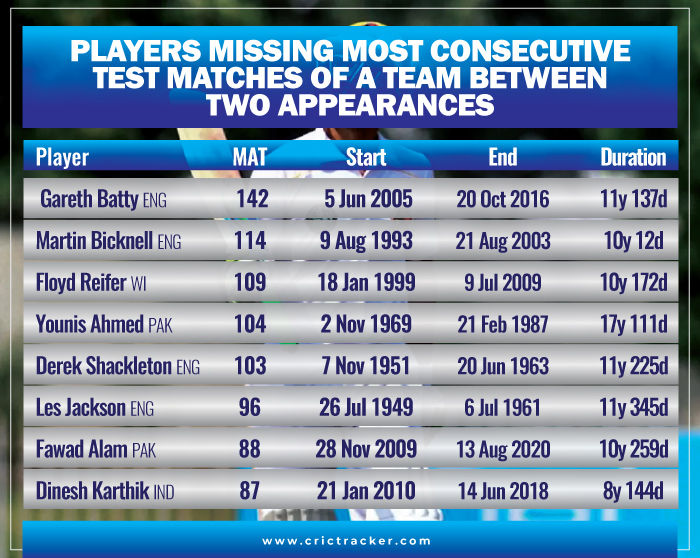