Stats: Hanuma Vihari scores centuries in both innings of the Irani Cup game against Vidarbha

Hanuma Vihari scored 114 and 180* in the Irani Cup game against the Ranji Trophy champions Vidarbha.

Andhra batsman Hanuma Vihari rescued the Rest of India (ROI) team twice in two innings in the ongoing Irani Cup game against the Ranji Trophy champions Vidarbha. In the game played at the VCA Stadium in Nagpur, ROI posted 330 in the first innings with Vihari scoring 114 from 211 balls with 11 fours and three sixes. After a 125-run stand between Mayank Agarwal (95) and Vihari for the 2nd wicket, the 25-year-old took the responsibility to take his team to a safe total amidst the collapse.

Vihari joined the hands with his skipper Ajinkya Rahane for a 229-run partnership after ROI were 46/2 and 50 runs still behind Vidarbha’s lead. Vihari batted 301 balls for his 180* with 19 fours and four sixes. His innings helped ROI to set a 280-run target in front of the hosts. Thus, Hanuma Vihari became only the 2nd player in the Irani Cup/Trophy history to score centuries in both innings of a game. Shikhar Dhawan scored 177 and 155 respectively for the Rest of India team in 2011 while playing against the Rajasthan team.

Centuries in each innings of an Irani Cup/Trophy match: 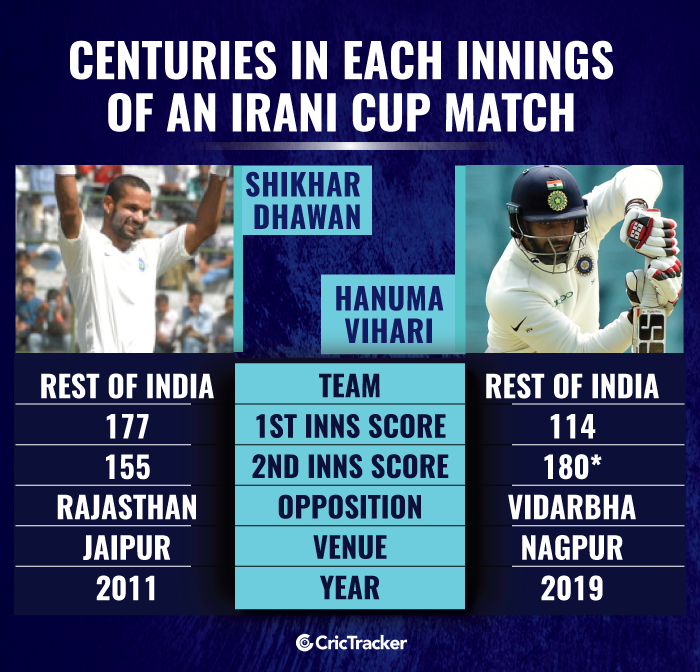 Vihari scored 183 against Vidarbha also in Nagpur during last year’s Irani Cup/Trophy. Thus, Vihari also became the first player in the history of the tournament to score centuries in three consecutive innings. The specialty of this achievement by Vihari is that these three centuries came in his first three innings of Irani Cup/Trophy. Prior to Vihari, eight players have scored hundreds in consecutive innings in this tournament. Among those, only Pravin Amre managed to score centuries during his first two innings.

Vihari ended the game with an aggregate of 294 runs from this game; the 2nd highest by any player in a single match in the Irani Cup. He stands only behind Dhawan who aggregated 332 runs during the 2011 game, scoring 150+ in both innings. In the coming years, Hanuma Vihari will have a chance of holding the record for most centuries in Irani Cup history as only Gundappa Viswanath and Dilip Vengsarkar are ahead of him with four centuries apiece.