Hardik Pandya finished with bowling figures of 5/28 in his six overs that included a maiden.

Hardik Pandya was widely criticised coming into the Nottingham Test match as the all-rounder was made scapegoat by many former players and reputed experts. However, Pandya trashed all those talks bagging his maiden five-wicket haul in the first innings to bowl England out for just 161. The young all-rounder sent England skipper Joe Root back to pavilion with his first ball in the game. In his 4th and 5th over combined, Pandya claimed four wickets to reduce the hosts to 128/9 from 110/5.

He finished with bowling figures of 5/28 in his six overs that included a maiden. The 24-year-old had a five-wicket haul in 4.5 overs. The 29 balls Pandya needed for his five-wicket haul is the 2nd fewest for an Indian after coming in to bowl in a Test inning. Harbhajan Singh took a five-wicket by 4.3 overs in Windies’ 1st innings in the Kingston Test match in 2006.

On a track that was helping the seamers, Harbhajan came in as the 2nd change bowler and claimed a five-fer in no time. His performance helped India bundle out the hosts on 103 from 80/4. Only two Indians have taken fewer than 40 balls to claim five wickets in an innings. Subhash Gupte finished with 5/18 in his six overs in the Dhaka Test against Pakistan in 1955 before Maninder Singh bettered it with a five-wicket haul in 33 balls also against Pakistan in the 1987 Bangalore Test.

Fewest balls for a 5-wicket haul by an Indian in Test cricket: 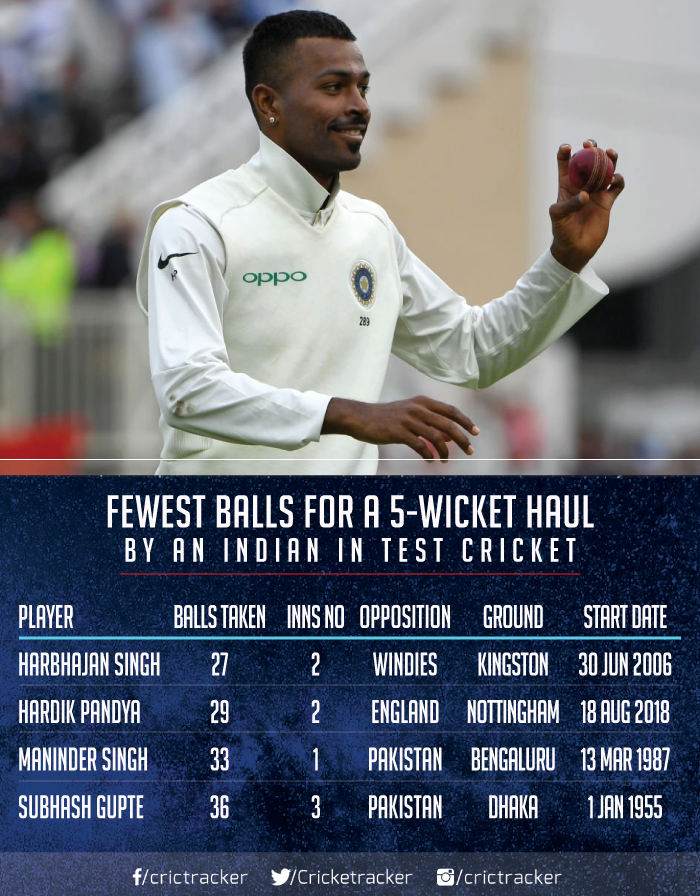