Stats: Haris Rauf tops the chart of most T20 wickets in 2020

Stats: Haris Rauf tops the chart of most T20 wickets in 2020

Rauf picked up three wickets, taking the Qalandars to their maiden PSL final in five seasons.

Haris Rauf, the Pakistan fast bowler, has become the highest wicket-taker in T20s in 2020 after Lahore Qalandars’ Eliminator 1 against the Multan Sultans in the Pakistan Super League (PSL). On Sunday, November 15, the right-arm speedster picked up as many as three wickets, conceding only 30 runs with one wide, and was arguably the standout bowler for his team, captained by Sohail Akhtar.

The Sultans got off to a flying start, chasing 183 runs in their 20 overs. Adam Lyth and Zeeshan Ashraf put on 47 runs off 25 balls to kickstart their run-chase. Rauf found Ashraf’s outside edge to give the Qalandars their first breakthrough. In the 14th over, the seamer accounted for the wickets of Shahid Afridi and Rilee Rossouw to put the skids under the Sultans once and for all.

Even as Rossouw was caught down the ground in an attempt to play a big shot, Afridi couldn’t open his account, seeing his woodwork rattled. After dismissing Afridi, Rauf even apologised to the former Pakistan captain with a smile on his face. On the back of his spell, the Qalandars won the game by 25 runs and set up a clash with the Karachi Kings in the final on Tuesday, November 17.

Haris Rauf goes to the top

Haris also picked up his 50th wicket in T20s in the year 2020 after he accounted for Afridi’s scalp. When he nipped out Rossouw, he surpassed Afghanistan’s Rashid Khan as the top T20 wicket-taker in 2020. Rashid, recently, had an excellent campaign for the Sunrisers Hyderabad (SRH) in the 2020 Indian Premier League (IPL). After Rauf, Shaheen Shah Afridi is third in the list of highest wicket-takers.

Afridi, Rauf’s teammate in the Qalandars, has 48 wickets to his name. In the final, he has a chance of touching the 50-wicket mark as well. Shadab Khan, who was a part of the Islamabad United, who failed to make the PSL playoffs, has 38 wickets.

England’s Chris Jordan and India’s Jasprit Bumrah are fifth and sixth on the list respectively. Bumrah ended second in the list of top wicket-takers in the IPL 2020, playing for the Mumbai Indians (MI). Jordan played for the Kings XI Punjab (KXIP). 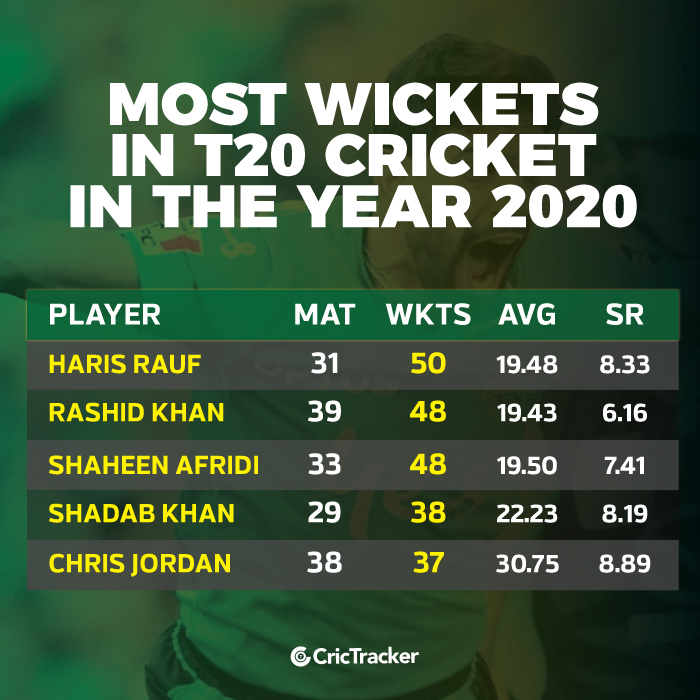