Fakhar slammed an unbeaten 210 as the Pakistanis secured an impressive win in Bulawayo.

Fakhar Zaman went berserk on Friday in the 4th ODI of the 5-match series against Zimbabwe at the Queens Sports Club in Bulawayo. The opening batsman scored an unbeaten 210 in just 156 balls that included 24 fours and five sixes. Thus, Fakhar became the first Pakistan player to score a double century in ODI cricket. In this process, Fakhar surpassed Saeed Anwar’s 194-run knock that came off 146 way back in 1997 against India at Chepauk.

The 21-year-old record came to an end when Fakhar reached 196 with consecutive boundaries in the 46th over bowled by Donald Tiripano. Fakhar Zaman is only the 4th Pakistan player to score a 150+ score in ODI cricket with all of them coming in these 21 years. Imran Nazir scored 160 in the 2007 World Cup game also against Zimbabwe while Sharjeel Khan scored 152 in the 2016 ODI against Ireland in only 86 balls.

Interestingly, Saeed Anwar’s 194 which stood as record ODI score, was surpassed by Charles Coventry in 2009 against Bangladesh also came at the Queens Sports Club in Bulawayo. The venue now has witnessed the highest individual ODI scores of Pakistan, Zimbabwe and Bangladesh. Tamim Iqbal recorded the highest ODI score for Bangladesh with his 154 in the game which Coventry created the world record.

Fakhar’s knock stands at No.5 in highest individual scores in ODI cricket as he became only the 6th to score a double ton. His knock helped Pakistan to record their highest ODI total of 399/1 after he stitched the first ever triple century opening stand in Men’s ODI cricket of 304 with Imam-ul-Haq. Their previous highest was 385/7 during the 2010 Asia Cup against Bangladesh. The 304-run stand is also the highest for any wicket for Pakistan and overall the 4th biggest for any pair in ODI cricket.

Fakhar’s unbeaten 210 is also the highest individual score in List A cricket by a Pakistan player. He went past Abid Ali’s unbeaten 209 for Islamabad against Peshawar during the 2017/18 domestic season. Kamran Akmal also scored 200 in a List A during the previous domestic season in Pakistan. Fakhar is overall the 5th player to score a List A double century for Pakistan. 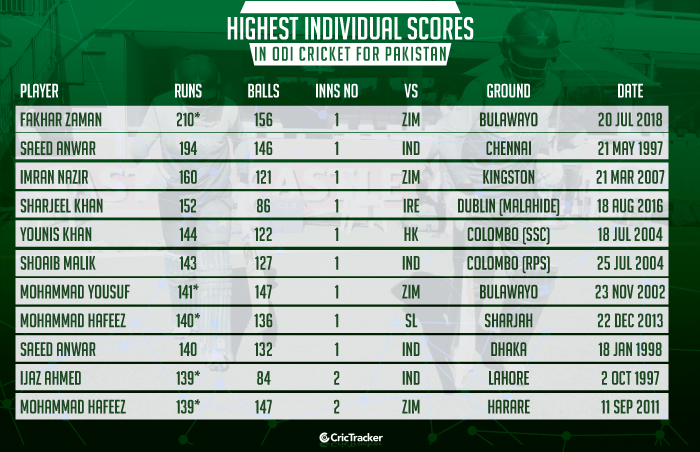