India’s 180-run defeat in the 2017 Champions Trophy final was their biggest in the ODI format against Pakistan.

India were a bit loose in their first game of the Asia Cup 2018 against Hong Kong and appeared as if a surprise upset was on the cards. But it was only until they broke the dangerous 174-run opening stand as things changed drastically after that. In less than 24 hours, India returned with a dominating effort with the ball to defeat a strong Pakistan team by 8 wickets. The opening burst from Bhuvneshwar Kumar and Jasprit Bumrah ensured the inform Pakistan openers aggregate just two runs.

Kedar Jadhav’s handy off-spin got better of the Pakistan middle-order as they were bundled out for just 162 runs. The Pakistan team’s collapsed from 2/85 which was the result of some tight bowling and poor shot selection. Indian openers Rohit Sharma (52) and Shikhar Dhawan (46) put on 86 for the first wicket in just 13.1 overs. Unbeaten 31 apiece from Ambati Rayudu and Dinesh Karthik took India over the winning line with 21 overs to spare.

India’s biggest ODI wins against Pakistan in terms of balls to spare:

Thus, India registered their biggest win in terms of balls to spare against Pakistan in the ODI format. Their previous biggest win over the arch-rivals was with 105 balls to spare in the 2006 Multan ODI where India chased down 162 in 32.3 overs to seal a bilateral ODI series win. This was also the first time that Pakistan lost an Asia Cup game by eight wickets. Interestingly, during the 2017 Champions Trophy final, India’s 180-run defeat was their biggest in the ODI format against Pakistan.

The Indian skipper Rohit Sharma’s conscious effort to negotiate Pakistan’s left-arm pacers did work on Wednesday where he raced to a 36-ball fifty. Rohit made only six runs in the first 17 balls he faced but scored 46 runs in the next 22 balls before getting out to Shadab Khan. By leading the team to victory against Pakistan, Rohit joined a rare list of Indian captains who enjoyed success in their maiden ODI against the neighbours. As many as 15 Indians have led the team in an ODI against Pakistan but only five ended up on the winning side in their first.

Indian captains who won their maiden ODI against Pakistan: 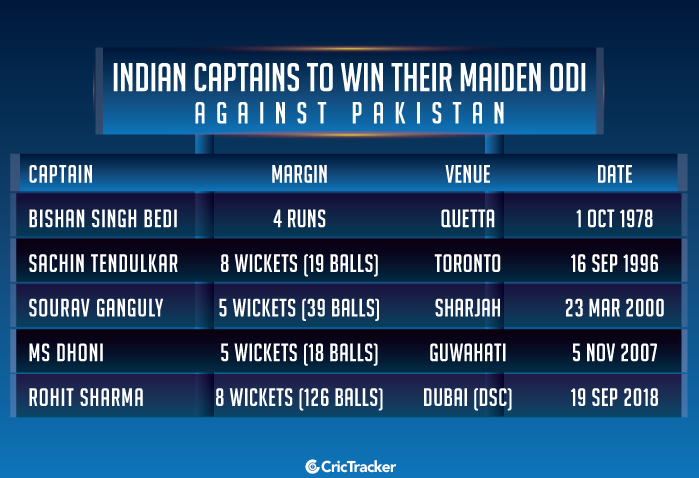