His ability against left-arm pacers was in question as Rohit Sharma prepared to lead the Indian team in the absence of Virat Kohli and Pakistan picked up as many as four in their squad. Rohit struggled every time he was up against Mohammad Amir but the Indian opener ensured the same wasn’t the case today. In their last group stage game against Pakistan, the opener scored 52 off only 39 deliveries that included six fours and three sixes. The last 46 runs of his knock were scored from 22 balls.

The 36-ball fifty is Rohit’s fastest in the ODI format and his first in less than 40 deliveries. His previous fastest was off 42 deliveries in two different games against Australia in the home series last year. This was the right-hander’s four fifty in six innings against Pakistan in the Asia Cup with which he now has the most number of fifty-plus scores against Pakistan in this competition. He thus surpassed Marvan Atapattu and Kumar Sangakkara who have scored three each. 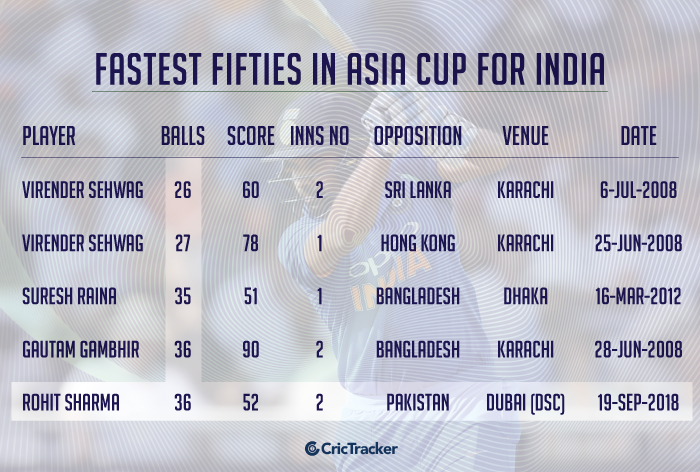 This quick-fire effort from India’s stand-in captain earned him two places on the list of fastest fifties in Asia Cup. Getting there in 36-ball is the joint 4th fastest for India in the Asia Cup, a list topped by Virender Sehwag who got there in 26 balls in 2008 final. Earlier in that tournament, Sehwag had hit a 27-ball fifty against Hong Kong.

In the same edition, Sehwag’s opening partner scored a 36-ball fifty against Bangladesh. Suresh Raina scored his fifty off 35 deliveries in the match where Sachin Tendulkar got to his 100th century.

Rohit’s fifty off 36 balls is also the fastest by an Indian captain in Asia Cup. Mohammad Azharuddin’s unbeaten 54 off 39 in the 1990/91 final is expected to be the previous fastest but the exact data of balls taken for the milestone is not available. Rohit’s fifty is also the 2nd fastest in Asia Cup by any player against Pakistan behind Mushfiqur Rahim’s 32-ball effort also while leading Bangladesh in 2014. In the same edition, Rohit had hit a 44-ball fifty against the arch-rivals. 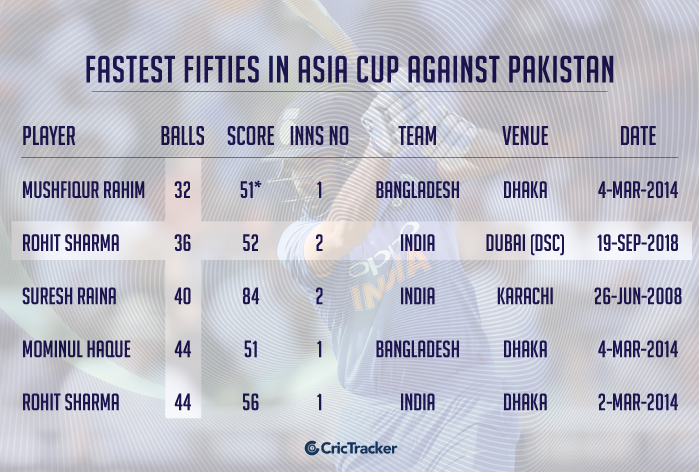