Vijay has found the going tough thus far on the England tour.

While most of India remained busy criticising the poor form of Shikhar Dhawan in the ongoing Test series against England, a new worry emerged in the form of Murali Vijay. The Tamil Nadu batsman was dismissed for yet another duck in the second innings at Lord’s, grabbing a pair in the Test that the visitors are struggling to save. Vijay fell to English spearhead James Anderson in both innings of the game.

With the pair, Vijay entered the club of five other Indian openers who got dismissed for a pair in history. In England, he became the third Indian opener to hold the dubious record. While Pankaj Roy bagged out for a pair in Manchester in 1952, Virender Sehwag experienced the same in Birmingham in 2011.

The other members of the ‘Pair Club’ include Farokh Engineer (vs West Indies in Mumbai, 1975); Wasim Jaffer (vs Bangladesh in Chittagong, 2007) and Shikhar Dhawan (vs South Africa in Mohali, 2011). Vijay was dismissed for 20 and 6 in the first Test in Birmingham which India lost by 31 runs.

The right-handed batsman, who played the best knock of 146 on the 2014 tour of England, has failed to score even a half-century in the four innings he has played in the 2018 series so far.

Here is the list of Indian openers who bagged a pair in Test cricket: 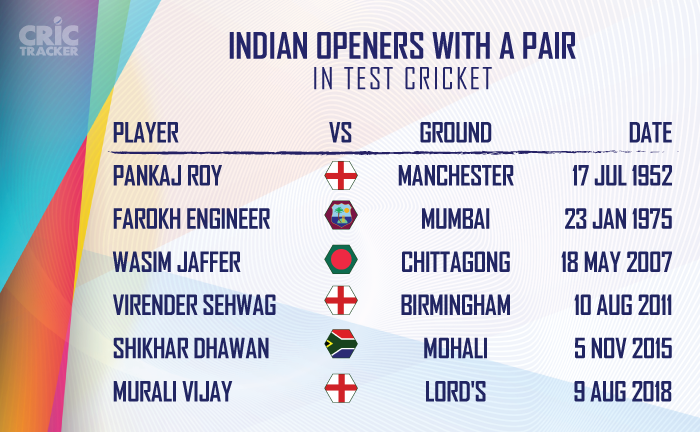 Vijay is also the sixth opener to bag a pair at Lord’s. The first player who was dismissed for ducks twice at this venue is Australia’s Alec Bannerman – it happened in the 1888 Test match against the host. The next such instance was recorded 45 years later in 1933 when West Indies’ Clifford Roach couldn’t open his account in both the innings of the Test.

It happened for the third time soon after in 1955 when South African batsman Jackie McGlew didn’t trouble the scorers in both the innings of the Lord’s Test of that tour. Former Indian coach and New Zealand batsman John Wright also features in this list as an opener to be dismissed for a duck twice in the same match, it was recorded in the year 1986.

The last opener to bag a pair of ducks at the Lord’s Cricket Ground was Pakistan’s Saleem Elahi, he is the only player apart from Vijay to have suffered this fate in the 21st century.

India lost both their openers cheaply after coming out to bat in the second innings on Day 4 to erase a massive lead of 289 that England had over them. Anderson, who picked a fifer in the first innings, removed Vijay and the other opener KL Rahul, just as he did in the first. Cheteshwar Pujara and Ajinkya Rahane were holding the fort in the second innings at the time of publishing this report.