Stats: Indians with most consecutive Test centuries without getting out in the 90s

Stats: Indians with most consecutive Test centuries without getting out in the 90s

Virat Kohli got out on 95 in the Johannesburg Test against South Africa in 2013.

Virat Kohli, well known for his century-hitting spree in ODI and Test cricket, got out for 97 on the opening day of the Nottingham Test match. The Indian skipper recorded a rare instance when he was dismissed in the 90s as he edged one from leg-spinner, Adil Rashid to the slips. It was just the 2nd time he was dismissed in the 90s in the format having notched up three-figure scores 22 times. He had got out on 95 in the Johannesburg Test against South Africa back in 2013 when JP Duminy claimed his wicket in a similar fashion.

The 29-year-old went on to score a century on each and every occasion he got to the 90s since 2014 before this game. In the process, Kohli scored 17 Test centuries without getting out after crossing the nervous nineties. Only eight players in Test history have had a longer streak of hundreds without getting out in the 90s. Pakistan’s Younis Khan leads the list with 32 centuries while the great Sir Donald Bradman was never dismissed when he was so close to his ton during his illustrious career.

Among the active players, Steve Smith has the longest streak as the banned Australia skipper converted his last 19 Test scores of the 90s to 100s. Virat Kohli’s 17 consecutive hundreds without getting out in the 90s is the most among Indian players. He thus broke Sunil Gavaskar’s record of 16 consecutive Test tons without a dismissal in this range with his magnificent 149 in Birmingham. The former Indian opener also has a similar record to his name with 13 centuries.

Mohammad Azharuddin’s first Test dismissal after going past 90 was after he scored 14 tons. Polly Umrigar never got out in the after crossing the nervous 90-run mark and went on to smash as many as 12 centuries during his 59-match Test career. Rahul Dravid converted his last 12 Test scores of the 90s to centuries.

Sachin Tendulkar, known for getting out in the 90s, has two different streaks of converting 11 consecutive 90+ Test scores into centuries. Virat is still only 29 and one can hope he . will once again feature in this list again probably with more centuries to his name in the next few years.

Most consecutive centuries without getting out in the 90s: 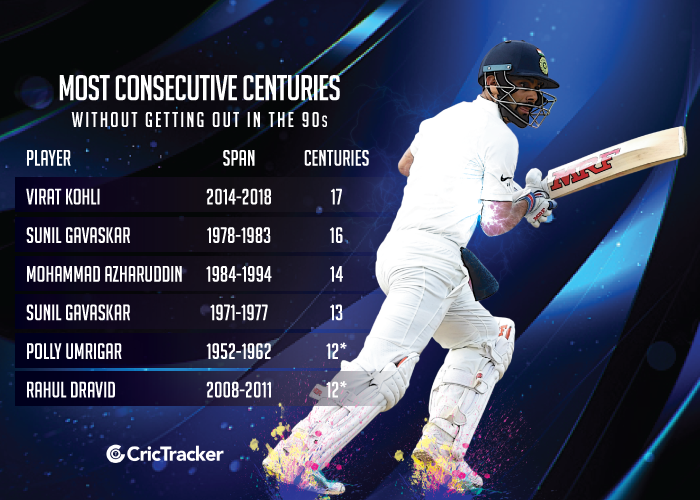