All the statistical highlights from India C’s record win in the Deodhar Trophy.

A perfect all-round performance from India C team saw them defeat India A by 232 runs and qualify for the Deodhar Trophy final along with India B. After electing to bat first, the India C openers Mayank Agarwal and Shubman Gill started off cautiously. Mayank was the first to cut loose as he continued to dominate the opposition’s bowling in the domestic cricket. He was dismissed for a 111-ball 120 but not before a 226-run opening stand with his captain Shubman who accelerated after reaching a century.

With 10 fours and six maximums, Shubman Gill scored 143 from 142 before getting out to Ravi Ashwin. Suryakumar Yadav hit 10 fours in the last 11 balls he faced as his outrageous 72* off 29 balls helped India C finish on 366/3. India A had a 57-run stand for the 4th wicket after being 17/3. However, once Jalaj Saxena was introduced into the attack, he ruled the game completely. The off-spinner recorded figures of 9.5-0-41-7 in his lone spell to bundle out India A team to just 134 in 29.5 overs.

All the statistical highlights from India C’s record win in the Deodhar Trophy:

1 – Shubman Gill became the first player to outscore the opposition in a completed Deodhar Trophy match. The previous closest to his feat was Yusuf Pathan when he scored 112 for West Zone in 2006/07 season while South Zone were bowled out for 116 only.

Overall, Shubman’s 143 is the 6th highest individual score in Deodhar Trophy and the 4th highest by a skipper in this competition. 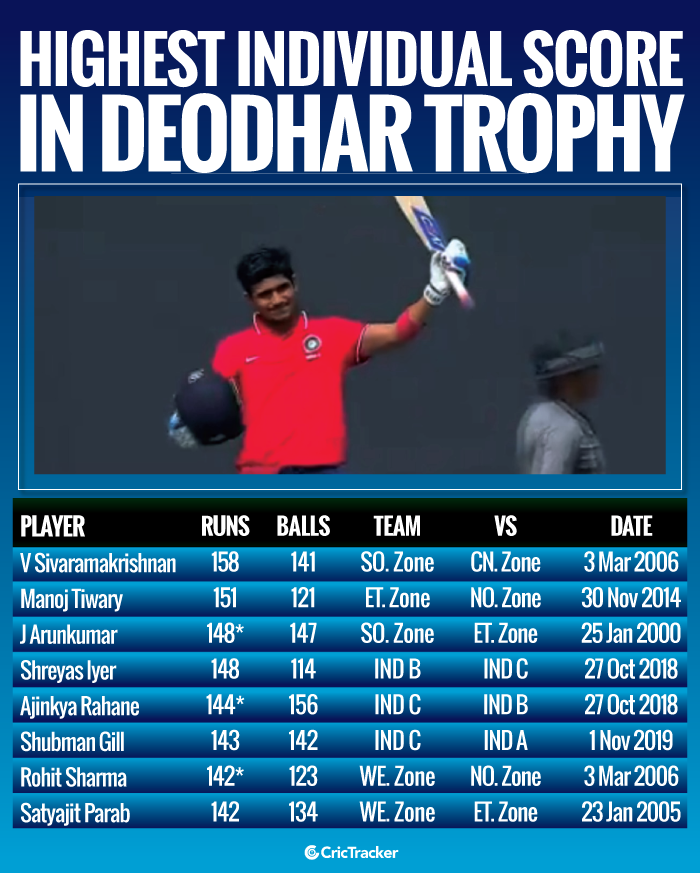 7/41 – Jalaj Saxena became the first player to take a 7-wicket haul in the history of Deodhar Trophy. This was Saxena’s maiden 5-wicket haul in List A cricket and also completed 100 List A wickets with this effort. 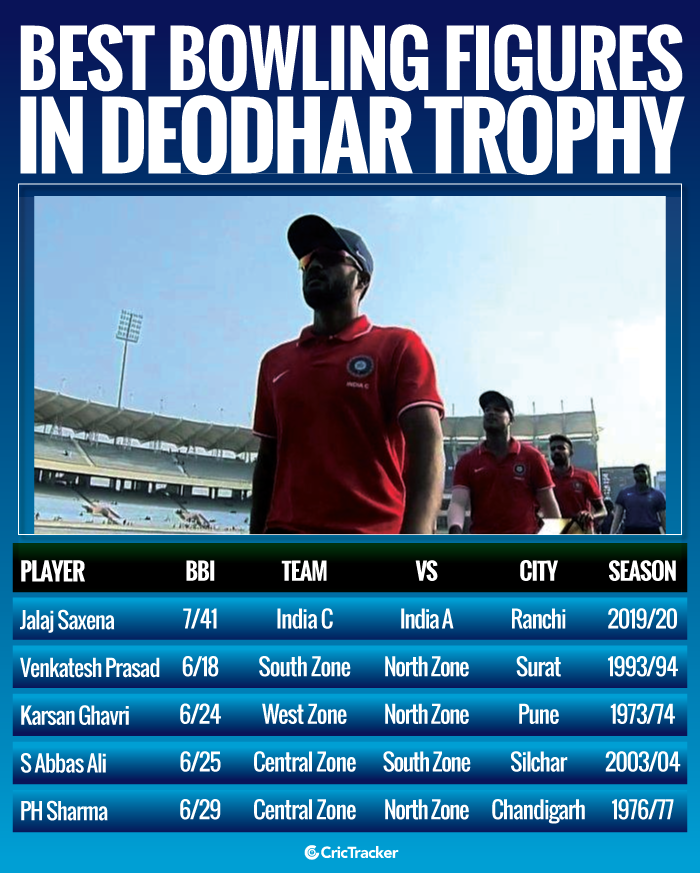 India A were bowled out for 134 in this match which is the lowest total in the Deodhar Trophy since West Zone’s 101 against North Zone in the 2010/2011 season of this competition.

366/3 – The total of 366/3 by India C is also the highest total in the history of Deodhar Trophy. The previous highest Deodhar Trophy total was produced by West Zone when they posted 362/5 in the 2008/09 edition final against East Zone.