Stats: Joe Root completes a whitewash at the toss against Virat Kohli

Stats: Joe Root completes a whitewash at the toss against Virat Kohli

Virat Kohli has won only seven tosses out of the 21 away Test matches in which he was the Indian captain.

Virat Kohli has always been an unlucky customer when it comes to the toss as the Indian skipper ends up losing it more often than not. He has won only 18 tosses of the 40 matches as captain in Test cricket and his toss winning percentage goes down to 41.3 when it comes to International cricket. Kohli’s record at winning toss is even worse in away matches as he won only seven out of the 21 matches

During the last year’s ODI series in the Caribbean, Kohli lost tosses in all the five matches. His fate repeated in the ongoing Test series in England as the Indian skipper called heads in throughout the series. But the coin that Joe Root flipped turned tails on all the five occasions. Losing the tosses does effect India’s winning chances while playing away from home as they have not won an away game while batting second ever since the start of 2010/11 season.

In this span, each and every away win of India has come when they batted first including the recent Nottingham Test where they were invited to bat first. By winning the toss in all the five matches, Root became only the 11th captain to win all the tosses in a five-match Test series. He is the first such skipper since Mark Taylor who achieved the feat in the home Ashes series in 1998/99.

Gary Sobers is the only captain to have won all tosses in a five-match series in whites on two occasions. Overall, the Pataudi Trophy 2018 is the 13th instance of a team winning all tosses in a tussle of five matches between the two countries. Virat Kohli is the 3rd Indian and overall the 10th captain to lose tosses in all five games of the Test series. The first among the ten was Australia’s Joe Darling who ended up asking his opposite number for a wrestling bout instead of the toss.

The West Indian captains John Goddard and Clive Lloyd got the better of Lala Amarnath in the 1948/49 series in India and Kapil Dev in the 1983 home series respectively. The only team to win all five tosses in a Test series and still ended up losing the series was AL Hassett-led Australians in the 1953 Ashes.

Teams winning all the tosses in a five-match Test series: 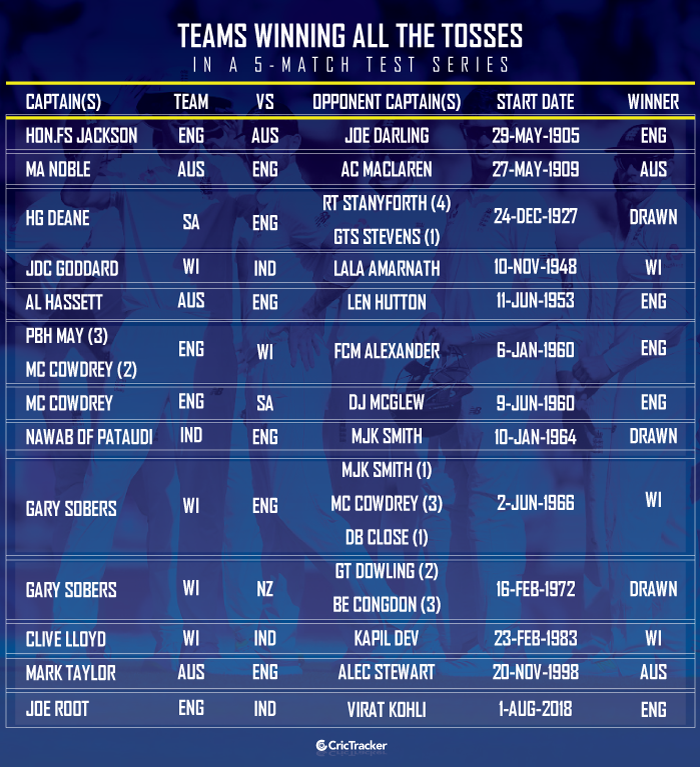