Stats: Karnataka create records on their way to the final of the Syed Mushtaq Ali Trophy

Stats: Karnataka create records on their way to the final of the Syed Mushtaq Ali Trophy

All the statistical highlights from Karnataka’s grand win against Haryana in the semi-finals.

Karnataka, the defending champions of the Syed Mushtaq Ali Trophy, cruised to the finals with a dominating win against Haryana in the semi-finals. Four of Haryana’s top five batsmen scored 30+ as they raced to 192/3 by 19th over. However, Abhimanyu Mithun ensured the opposition didn’t cross the 200-run mark as he claimed five wickets including a double hat-trick in the last over. Chasing 195 to win on a flat track, Karnataka put themselves well ahead of the required rate.

KL Rahul smashed a 31-ball 66 with four fours and six maximums to share a 125-run opening stand in only 9.3 overs with Devdutt Padikkal. The 19-year-old fell short of his hundred as he was dismissed only after scoring 87 from only 42 balls. Mayank Agarwal scored an unbeaten 30 off 14 as Karnataka reached the target with five overs to spare with eight wickets in hand.

All the statistical highlights from Karnataka’s grand win against Haryana in the semi-finals:

1 – Abhimanyu Mithun now became the first player to take a hat-trick in all of Ranji Trophy, Vijay Hazare Trophy and Syed Mushtaq Ali Trophy. Mithun bagged a hat-trick on his Ranji debut against Uttar Pradesh in 2009. Last month, he took a hat-trick in the Vijay Hazare final against Tamil Nadu also in the last over of the opposition’s innings.

2 – Abhimanyu Mithun became only the 2nd player in the history of Twenty20 cricket to take five wickets in six successive balls bowled. Al Amin Hossain also took five wickets in the last over of the Abahani Limited innings in 2013 while representing UC Bank’s BCB XI.

In List A cricket, David Payne of Gloucestershire achieved this feat against Essex in 2010. As many as five players claimed five wickets in space of six balls with the last one been Neil Wagner in the 2010/2011 Plunkett Shield. 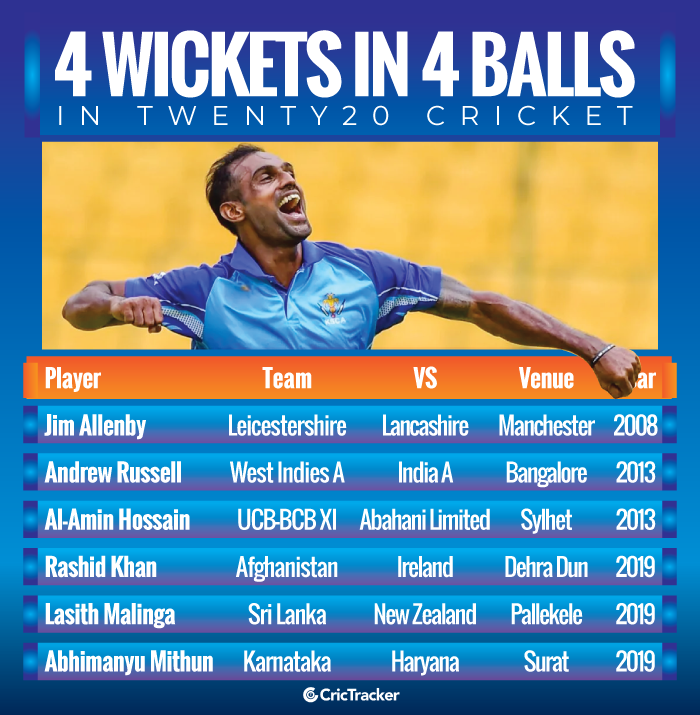 4/4 – Mithun became only the 6th player to take four wickets with consecutive deliveries in the Twenty20 format and the first Indian do so. Among Indians in other formats, Shrikant Mundhe took a double hat-trick in List A cricket while Sadanand Mohol, Shankar Saini and Mohammad Mudhasir recorded this feat in first-class cricket.

6 – Number of fifty-plus scores for Devdutt Padikkal in this tournament including an unbeaten century against Andhra. He is now the first player to record six fifty-plus scores in a single edition of Syed Mushtaq Ali Trophy.

195 – Karnataka’s successful chase of 195 is now the highest any team has chased down in 15 or fewer overs in the Twenty20 format. Netherlands chased down 190 in the WT20 2014 match against Ireland taking only 13.5 overs while in the same year, Mumbai Indians required only 14.4 overs also while chasing 190 against Rajasthan Royals.

195 – This 195-run chase by Karnataka is also the highest in a knockout match of SMA T20 Trophy. The previous highest was 182 by Hyderabad in the quarter-final of the 2009/10 season against Mumbai.

548 – Devdutt Padikkal’s 548 runs in this tournament thus far are the most by any player in debut Twenty20 series/tournament. Rohan Kadam aggregated 536 during the 2018/19 edition of Syed Mushtaq Ali T20 Trophy also while playing for Karnataka.

No player barring Rohan and Devdutt has amassed 500 runs in their debut series/tournament or in a single edition of SMAT20.