Stats: Kent's No.11 batsman scores one run in a century partnership

Stats: Kent’s No.11 batsman scores one run in a century partnership

The pair added exactly 100 runs for the 10th wicket.

Top order batsmen usually take the strike and do the bulk scoring while batting along with No.11 batsman who are rarely seen doing the same along with fellow lower-order players. In one such instance on Tuesday, a No.10 showed complete dominance in the partnership with the last man standing in a County match. Kent batsman Grant Stewart who walked in at No.10 scored a brilliant century against Middlesex by batting out with the No.11 player Ivan Thomas. The pair added exactly 100 runs for the 10th wicket out of which Thomas scored just one run.

Kent posted 241 in the first innings and bundled out the opponents to just 56 and decided to bat again. Kent lost their 9th wicket in the 2nd innings on 181 while Stewart was batting on eight runs. The century partnership came in exactly 100 balls lasting 63 minutes before Stewart holed out scoring 103 in 74 balls that included 13 fours and five sixes. Thomas remained unbeaten on one run off 36 balls as Kent set a target of 467 for the visitors. Stewart scored 95 out of the 100-run stand with four more runs coming off leg-byes.

Thus, Ivan Thomas became only the 2nd player to score as little as one run in a century partnership in first-class cricket. Dilhara Fernando scored one run off 23 balls before getting run out during the 2004 Faisalabad Test against Pakistan. He shared a 101-run partnership for the 9th wicket with Sanath Jayasuriya in the 2nd innings out of which the opening batsman scored 88 runs while the remaining 12 were extras.

The Australian born Grant Stewart planted himself too in the history books becoming the first Kent No.10 batsman to score a century in FC cricket. Stewart was clinical with the ball in the first innings as he took 6/22 in his 10 overs to keep Middlesex down to a low total.

Thus, Stewart became the first player in the last 90 years to take a 6-wicket haul and score a century in the same county championship game for Kent. He contributed 95% of runs in that 10th wicket stand which is the 2nd highest contribution by any player in a century partnership in first-class history.

Here is the highest percentage of runs scored by a batsman in a century stand in FC cricket: 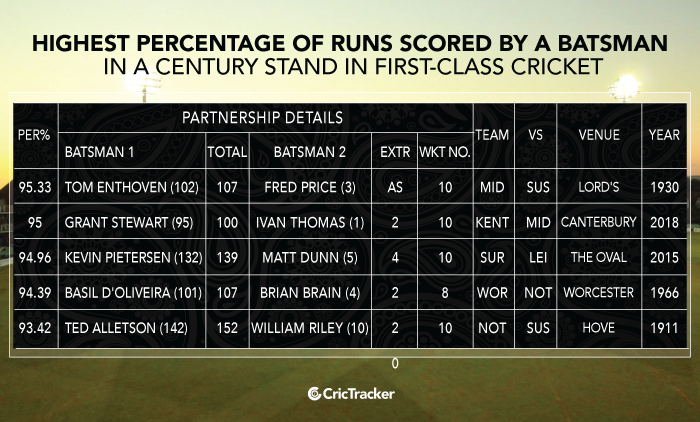