KL Rahul is slowly on the course of becoming India’s best batsman in the Twenty20 format given his domination with the bat over the last couple of years. Rahul amassed 500+ runs in each of the last two editions of the IPL where he scored 1252 runs to be precise across 28 innings with 13 fifty-plus scores. After facing the axe from the Test squad last year, Rahul concentrated on excelling in the domestic competitions for his state team.

Rahul gave the much-needed starts for Karnataka in their victorious Syed Mushtaq Ali T20 tournament. He carried on that momentum into the home T20I series Bangladesh, West Indies and Sri Lanka where he turned up with key knocks. Rahul is continuing the same in the ongoing series in New Zealand where he is also keeping the wickets. He has scored 830 runs across 20 T20I innings with nine fifties in the 2019/20 season while no one else scored even 700 runs.

Out of those, KLR amassed 517 runs across 12 T20I with help of six fifties. The ongoing season is making a statement of how crucial is Rahul to the Indian T20I side even more than the likes of Virat Kohli and Rohit Sharma who are the top two run-getters in Men’s T20Is. In the 4th T20I against New Zealand on Friday, Rahul gave a good start for the Indian team who kept losing wickets in the first half of their innings.

KL Rahul is the fourth-fastest player to score 4000 runs

The keeper-batsman scored 39 runs from 26 balls with three fours and a couple of sixes. The first of the two sixes helped KL Rahul to complete 4000 runs in the Twenty20 format. He was only eight runs away to reach this milestone ahead of this match. Rahul got there in 117 innings which makes him the fastest Indian to complete 4000 T20 runs. The previous quickest Indian to 4000 T20 runs was Virat Kohli who got there in 138 innings. This meant Rahul broke the Indian record with 21 innings to spare.

The 117 innings taken by Rahul for 4000 T20 runs are also the 4th fewest by any player. Chris Gayle is the quickest player to get there taking 107 innings while Shaun Marsh needed 113 innings. The current No.1 T20I batsman Babar Azam is 3rd on this list as he reached this milestone during 2019 T20 Blast in only 115 innings. Babar and Rahul are the only players from Asia to reach 4000 T20 runs in less than 130 innings. 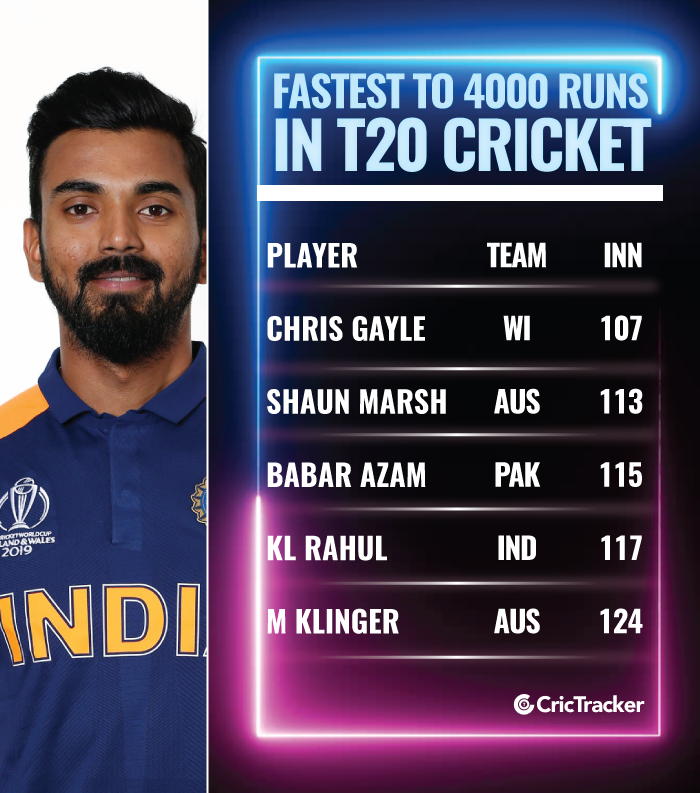