KS Bharat became only the 7th Indian keeper to claim ten and more catches in a first-class match.

India ‘A’ started off the 2-match unofficial Test series against South Africa ‘A’ comprehensively winning the first match by an innings and 30 runs. India made 584/8 in their only innings thanks to Mayank Agarwal’s 220 and Prithvi Shaw’s 136 after the visiting side posted 246 after electing to bat first. South Africa A produced a better batting performance in the 2nd innings as they made 308 but failed to escape from a defeat. Mohammed Siraj bagged five-wicket hauls in both the innings including the last wicket of the match with seven balls left in the game.

Kona Srikar Bharat, India A’s wicketkeeper, took a total of ten catches in the match with five catches each in both the innings. The 24-year-old also scored a 77-ball 64 batting at No.6 as he hit five fours and four sixes. Bharat, who hails from Andhra, has been around India A squads over the last couple of years for his exceptional keeping skills. His batting numbers aren’t superior to any other keeper in the race to the Indian Test team but he gains points for his glove-work.

Most catches by Indian wicket-keepers in a first-class match: Khaleel keeper moved to the United States of America (USA) and has found a place in the national side as well. Wriddhiman Saha took 10 catches in two different matches in the recent 2017/18 season. He took ten catches in the Ranji game for Bengal and later took 10 in the Cape Town Test to become the first Indian to take as many catches in a Test match. Assam’s Samarjit Nath took ten catches behind the stumps in his only first-class match.

Bharat also became only the 8th keeper to effect 10 dismissals in a first-class match while playing for country’s ‘A’ team. He joined the list that includes the likes of MS Dhoni and Adam Gilchrist. The former Indian captain, Dhoni effected 11 dismissals in the 2004 tour game against Zimbabwe Select XI ahead of the unofficial Tests against Zimbabwe and Kenya. Australia’s Steve Rixon took ten catches in two different FC matches in unofficial Tests against South Africa in 1980s.

Most dismissals for ‘A’ teams by wicket-keepers in first-class matches: 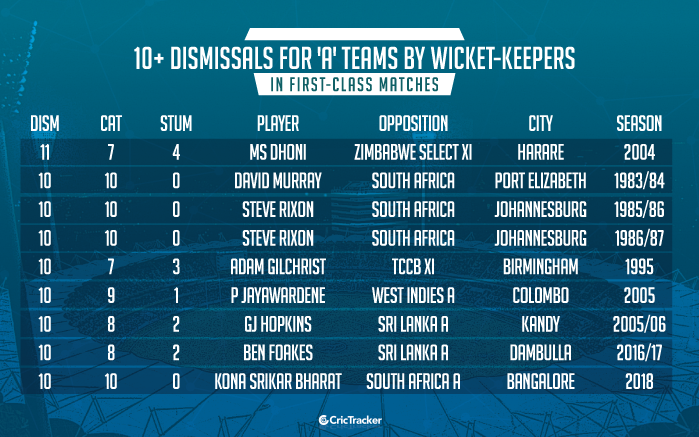