Lasith Malinga picked up 7/49 against Kandya while leading Galle on Thursday.

Just after playing a key role in Mumbai Indians’ victory over Chennai Super Kings, the veteran pacer Lasith Malinga flew to Sri Lanka for participating in the Domestic one-day cup. Malinga finished his four overs close to mid-night with figures of 3/34. In about 8 hours after the completion of the game at the Wankhede Stadium, he travelled to Pallekele to lead his team Galle in the opening game of the Super Four Provisional Limited-Overs Tournament.

Taking on the Kandy team, Malinga led his team to a huge 156-run victory with some brilliant bowling. He claimed seven wickets for 49 runs as the hosts were bundled out for just 99 in response to Galle’s 255/10. Malinga’s career-best efforts came in 9.5 overs which he bowled in a single spell that started in the first over of the chase. This meant Malinga bagged ten wickets in 13.3 overs which he bowled in less than 16 hours of time span. His previous best bowling figures in a List A game were recorded against Kenya in the 2011 World Cup in Colombo.

With his effort of 7/49, Malinga became only the 6th player to bag a 7-wicket haul as captain in List A cricket. Four out of the six players including Malinga have recorded this achievement in a domestic One-Day game in Sri Lanka. Ranga Dias’s 7/23 in 2003 are the best bowling figures for a captain in List A cricket. Waqar Younis is the only bowler to claim a 7-fer as captain in ODI cricket which he recorded in the 2001 Leeds ODI against England.

Best bowling figures as captain in List A cricket: 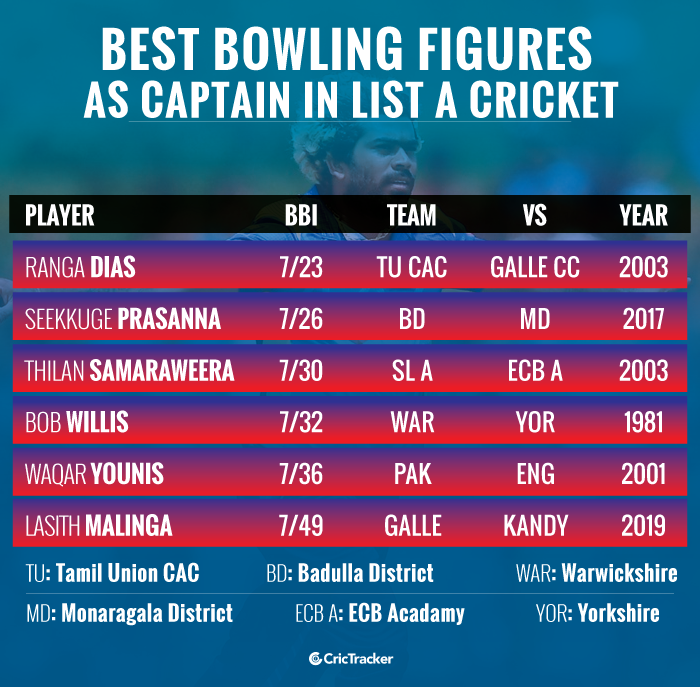