David Warner has an impeccable record for the Sunrisers Hyderabad in the IPL.

18th April is a date to remember in the annals of the Indian Premier League (IPL) as the league kick-started on the same date in 2008. Brendon McCullum lit up the historic beginning with an unbeaten 158. But the most effective and important thing to happen to the league was on the same date in 2014, when David Warner made his debut for the Sunrisers Hyderabad. The Australian opener was the costliest player for the Hyderabad franchise at a moderate price of 5.5 crores INR during the IPL 2014 auction.

Five years from the date, Davey has 3029 runs to his name for SRH at an average of 55.07. He has 33 fifty-plus scores for them in only 67 innings. Warner is the only player with 3000+ IPL runs since 2014 and he did it despite not playing the 2018 edition. Given the way he has been firing in the present season, his efforts in the first two seasons look ordinary. A top-heavy line-up ensured Warner batted at No.3 and No.4 in 2014 where he aggregated 528 runs at an average of 48 with six fifties.

He received the Orange Cap for his exploits in the 2015 season where the left-hander amassed 562 runs at an average of 43.43 with seven fifties. In the mad-rush 2016 season for batsmen, Warner finished with a whopping 848 runs with nine half-centuries and averaged 60.57. Virat Kohli took the orange cap scoring 973 runs that season but it was Warner who led the Sunrisers to their maiden title.

Winning the title didn’t change anything for Warner the batsman as he smashed 641 runs in only 14 innings at 58.27 in the very next season and turned out to be the Orange Cap winner once again. The sandpaper gate in 2018 ruled the Aussie out of the season. SRH missed the impact he has as a batsman as Warner accounted for 29.07% of runs scored by SRH batsmen between 2014 and 2017. His consistency and domination for the Sunrisers have hardly been matched especially in terms of impact and the numbers do suggest the same.

Highest batting average for a team in the Twenty20 format: (Min: 1000 runs) 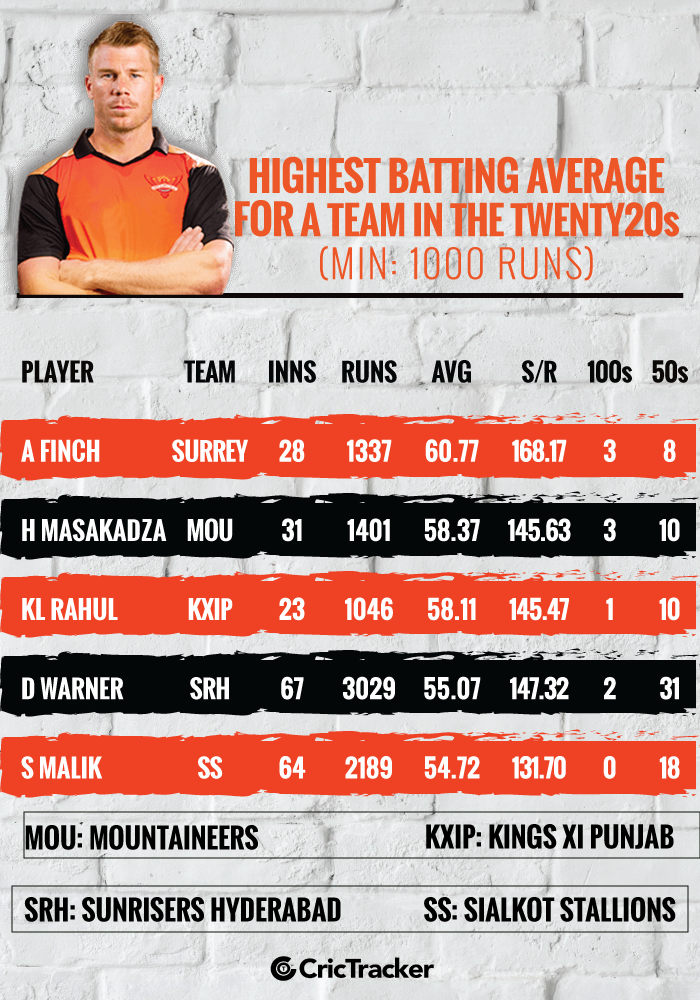 At present Warner’s average of 55.07 for SRH is the 4th highest among the players with 1000+ Twenty20 runs for a single team. KL Rahul, who completed 1000 runs for Kings XI Punjab this week, has an average of 58.11 for them and stands at 3rd in this list. The evenness in Warner’s scores has put his record for SRH on the next level. He has 49 scores of 20 and more out of the 67 innings he batted for the Sunrisers and has 39 scores of 40 and more.

In absence of the pocket dynamite in 2018, Kane Williamson found a place in the playing XI and chosen to lead the team. The New Zealander showcased his T20 skills by finishing as the leading run-getter with 735 runs and led SRH to the final. The result of his performances was that some even felt Williamson has fulfilled the place of Warner. A few critics went as far as calling for Warner to be benched even once he returns; clearly forgetting the Australian’s dominance over the years.

Most fifty-plus scores for a team in the Twenty20 format: 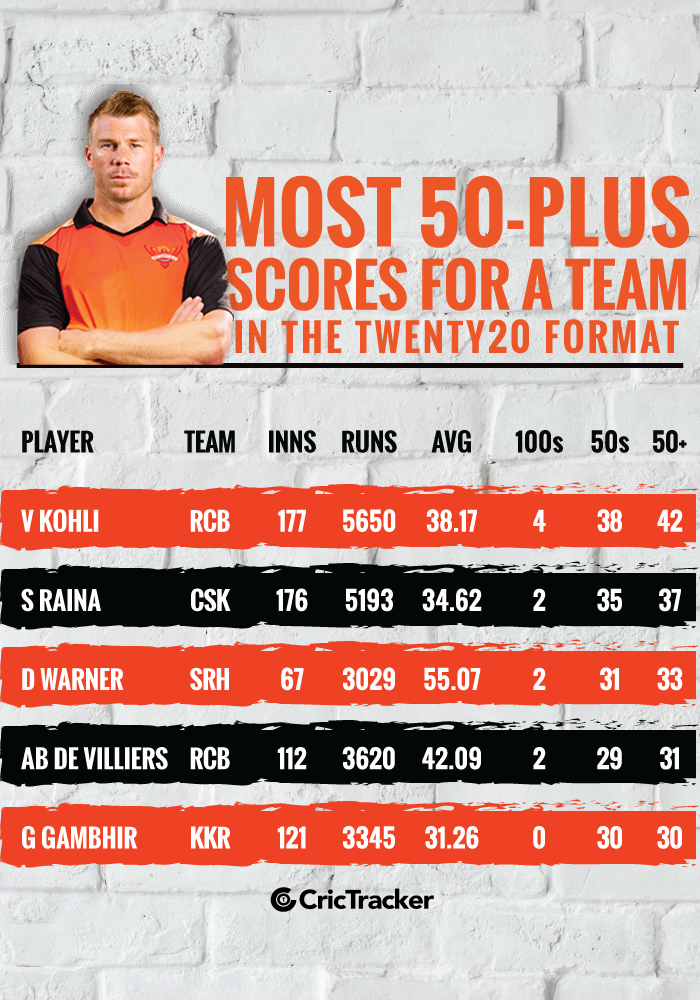 David Warner shut down all the amateur talks about his position in the XI as he began the season with a bang. He carried on from where he left in 2017. The lack of field time over the last 12 months hardly affected his success. In fact, Warner might be set for yet another Orange Cap finish and he has scored 450 runs in 8 innings thus far at an average of 75. Till date, the 32-year-old has two centuries and 31 fifties for the Orange Army all in from 67 innings.

His 33 fifty-plus scores for SRH are bettered by only two players in the Twenty20 format. Kohli has 42 of them for RCB while Suresh Raina has scored fifty-plus on 37 instances for CSK but both the players have featured in 100 innings more than Warner. The dashing opener registers a fifty-plus score in every 2.03 innings for the Sunrisers which is the best ratio for any player for a team in Twenty20 cricket. 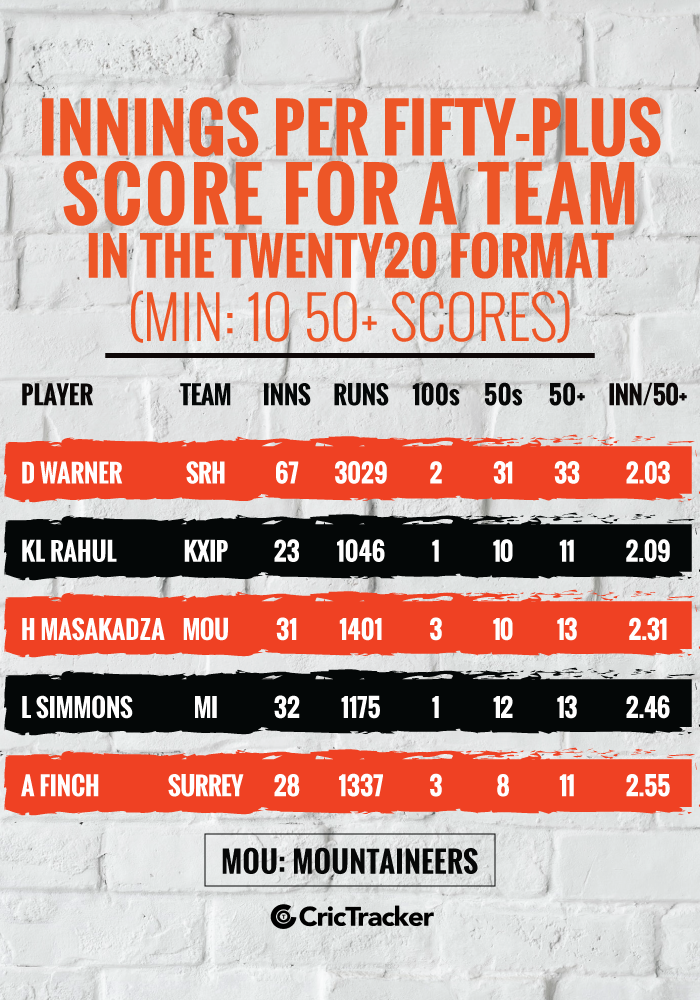