India chased down 18 runs in the Super Over during the 3rd T20I against New Zealand.

India sealed the 5-match T20I series against New Zealand following a thrilling win in the Super Over which was their 3rd consecutive win on this tour. Skipper Kane Williamson’s big knock put New Zealand two runs away from a win with four balls to spare. They managed to get only one of those four deliveries bowled by Mohammed Shami but the 17-run Super Over against Jasprit Bumrah nearly sealed the first win of the series for the Kiwis as India made only eight runs from first four balls.

The equation came down to ten from last two balls with Rohit Sharma on the strike. Rohit was India’s top scorer earlier in the game with a 65-run knock that included 26 runs coming across five balls. The Indian opener held his nerves to send the last two deliveries over the fence to seal a series win. Interestingly, this was India’s first-ever appearance in a Super over in International cricket.

New Zealand, on the other hand, were the most experienced team in the Super Overs. They now have been involved in six Super overs; twice the number of instances for any other team. However, the Blackcaps managed to win only once – against Australia in 2010 Christchurch T20I where Tim Southee conceded only six. Southee bowled the Super Over for New Zealand’s on the other four instances in this format but ended up on the losing side in all the four. 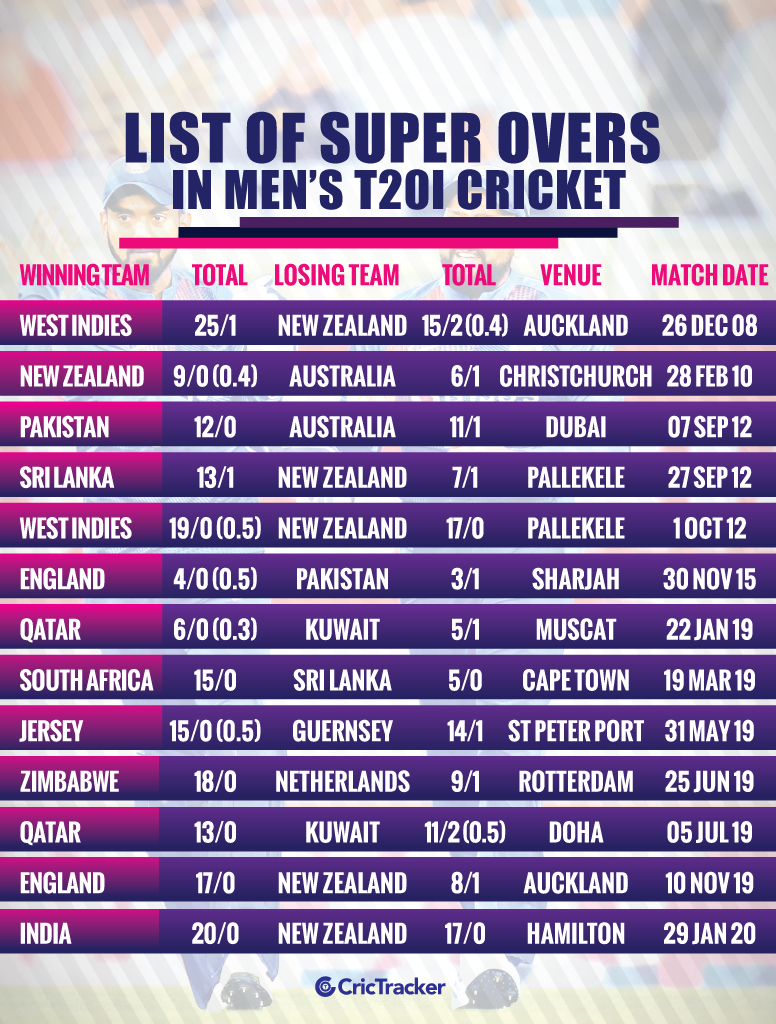 During the 2012 WT20, he conceded 13 runs against Sri Lanka but the New Zealand team managed only seven runs in reply. Four days later, New Zealand were involved in a Tie match against West Indies in that tournament and this time, the Kiwis smashed 17 runs. However, the Caribbean side smashed 19 runs in only five balls as Southee bowled a no-ball in it.  During the last year’s 5-match series decider, Southee was taken apart for 17 runs by England team in the Super over which they won by 9 runs.

The 20 runs he conceded against India on Wednesday are the 2nd most runs a bowler conceded in a Super over in Men’s T20Is. The highest is 25 runs by Daniel Vettori in the 2008 Auckland T20I against West Indies. It was also the first-ever instance of a Super Over in Men’s T20I cricket and the only time New Zealand didn’t have Southee bowling the one-over eliminator. Out of the six instances of a bowler conceding 17+ runs in a Super over, three of them have been recorded when Southee was the bowler.

Most runs conceded in a Super Over in Men’s T20I cricket: 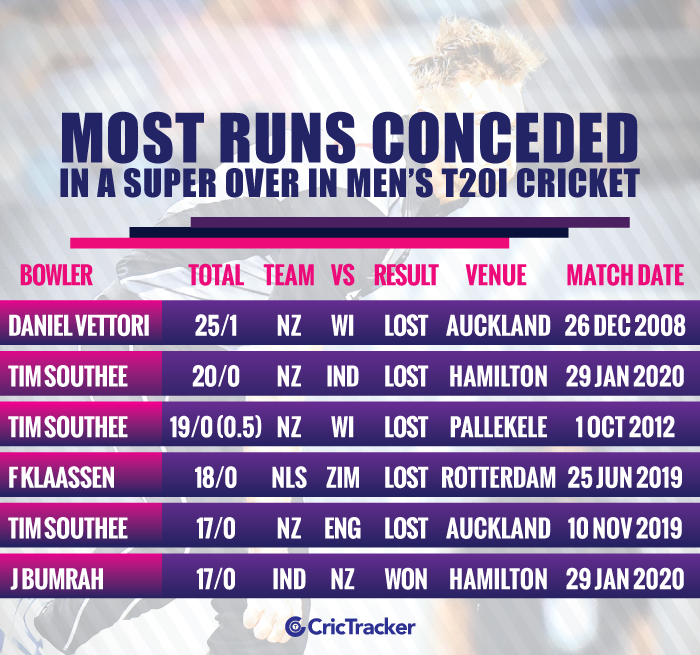