Stats: Meghalaya bowls out Manipur for 27 in the Ranji Trophy game

Stats: Meghalaya bowls out Manipur for 27 in the Ranji Trophy game

Meghalaya seal an innings and 113-run win over Manipur inside five sessions.

Meghalaya is having some good time in the Indian domestic cricket as they have registered some memorable wins over the last couple of months. They defeated Mumbai at the iconic Wankhede Stadium in the Syed Mushtaq Ali T20 tournament and also got better of Assam, the veteran North-East side. Meghalaya had only one outright win to their credit in 2018/19 season but have already won three in the current season with three matches still to be played.

The recent most game was against Manipur in the ongoing 6th round which they wrapped up in less than five sessions. After being put in to bat, Meghalaya were three down for just 5 runs on the board with both their openers bagging ducks. The young reputed left-arm pacer Rex Singh claimed all three wickets. The in-form trio of DB Ravi Teja (90), P Bisht (66) and R Sanjay Yadav (44) rescued the team with their part of contributions as Meghalaya ended up with 235.

Meghalaya got only 15 overs to bowl before the stumps on the first day at Manipur but that was enough for them to claim 7 wickets. Left-arm spinner Sanjay and pacer Abhay Negi did the damage with the ball. Manipur ended the day on 18/7 and were eight wickets down for 18 at the end of the first over on day 2. Nine runs were added for the last two wickets before Sanjay Yadav got his 6th wicket while Negi ended up four wickets. Manipur’s first innings ended at 27 which was spanned across 18.1 overs.

Sanjay continued his wicket-taking spree and claimed another 5-fer in the match. He finished with match figures of 11/47 as Manipur’s 2nd essay came to an end on 92 in 27 overs. Thus, Meghalaya secured an innings and 116-run win. The total of 27 by Manipur is now the joint 7th lowest ever in the history of Ranji Trophy. This is also the 2nd lowest total in the Ranji Trophy across the last 40 years. The lowest-ever total of 21 by Hyderabad also came in this period only (2010).

The Hyderabad team was skittled for just 21 runs by Rajasthan during the 2010/11 season game in Jaipur with the debutant Deepak Chahar shining with an 8-wicket haul. Interestingly, Hyderabad also recorded the highest ever team total in Ranji Trophy of 944/6 against Andhra during the 1993/94 season. Jammu and Kashmir appear twice in this list as they were bowled out for exactly 23 runs against Delhi in 1960/61 season and also against Haryana in 1977/78 season.

Lowest totals in the history of Ranji Trophy: 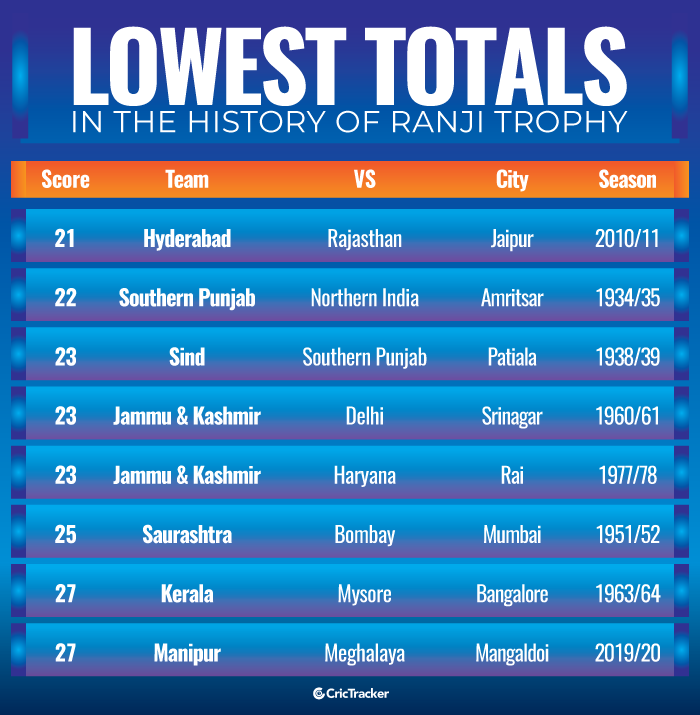