Mohammed Shami finished with figures of 5/69 against England in Birmingham.

Mohammed Shami didn’t get a chance to feature in India’s playing XI at the World Cup 2019 straight away. Bhuvneshwar Kumar caught up an injury while bowling in the game against Pakistan that sidelined him for the next 2-3 matches. In the meantime, Shami made most of the opportunities he got taking 4-wicket haul after 4-wicket haul. In his first match against Afghanistan, Shami recorded a hat-trick in the 50th over to seal a close win for India.

He followed it with a 4-wicket haul in the game against Windies where he dismissed the likes of Chris Gayle and Shai Hope with the new ball. The two batsmen were deemed to be key for the Caribbean side to chase down India’s total. Shami got to play against England as well as picked up the crucial wickets of Jonny Bairstow and Eoin Morgan when they were going towards a big total. He returned to bag three more wickets in the final ten overs but was taken for boundaries.

Mohammed Shami finished with figures of 5/69; his maiden 5-wicket haul in the World Cup. With his effort, Shami became only the 2nd player in the history of World Cup to claim 4-wicket hauls in three consecutive matches. Shahid Afridi was the first to achieve this feat during the 2011 edition. Overall, this was Shami’s 4th 4-fer in World Cup as he took one against Pakistan on his CWC debut in 2015. No other Indian has more than two 4-fers in the World Cups.

Shami also became only the 2nd Indian to record 4-fers in three straight ODI innings. Narendra Hirwani recorded this feat in 1988 to become the first player from any country to achieve it. Overall, nine players including Shami have had 4-fers in three straight innings in the ODI format. Waqar Younis is the only guy to record this feat more than once. The Pakistan pacer had three successive ODI 4-fers on two different instances in 1990 and once more in 1994.

Players with most consecutive 4-wicket hauls in ODI cricket: 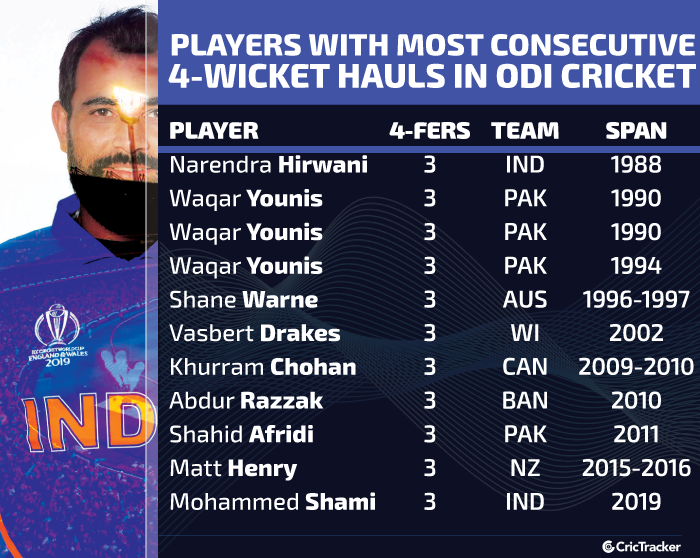